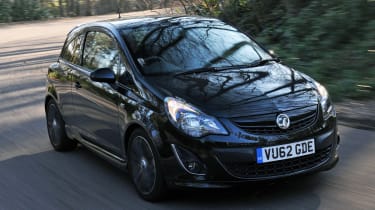 The Corsa Black Edition is good value when compared to the SRi version. It’s still well mannered around town and is more responsive, but it ultimately lacks the sparkle and entertainment of its rivals. Buyers who demand sharper performance should step up to the VXR models, as the Black falls short in terms of dynamics and fun factor.

Vauxhall has launched this limited-edition Corsa Black in an attempt to steal the spotlight away from the acclaimed new Ford Fiesta. But is this supermini special enough to succeed?

The Black Edition is based on the sporty SRi model, and only 500 will be produced. Three and five-door versions are available, all fitted with foglamps, more aggressive front and rear bumpers and matching side skirts.

To go with the more aggressive look, Vauxhall has boosted the SRi’s 1.4-litre turbocharged engine by 19bhp, to 118bhp.

It promises the same 51.4mpg fuel economy and 129g/km CO2 emissions as the standard car, though, thanks to stop-start. And while performance isn’t exactly on a par with a hot hatch, the Black is a massive 1.6 seconds faster than a regular SRi in the sprint from 0-62mph, posting a time of 10.3 seconds.

The power hike makes the newcomer responsive to drive, if not quite as exciting as you’d expect given the Turbo badge on the bootlid. The leather steering wheel feels chunky and good to hold, while the seats are firm and supportive, but body control is a little sloppy, despite the fact the Black has stiffer sports suspension.

The ride is neither firm enough to be sporty nor supple enough to be comfortable, while slotting the gearlever home takes a bit of force, as the five-speed manual box is notchy.

On the motorway, there’s a lot of wind and tyre noise, although the engine spins quietly. And around town, the car is as well mannered as any other Corsa; it’s refined at idle and the stop-start works well.

It’ll take a keen Vauxhall fan to notice the differences inside, with silver stitching on the seats the only update over the SRi. But buyers aren’t likely to mind – as the step up in performance and exterior style the Black offers over the regular car is well worth the £395 price premium on its own.