The Vauxhall Crossland X is an improvement on the retired Meriva, but its position is unclear next to the existing Mokka X 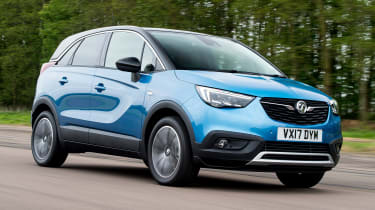 The new Vauxhall Crossland X is a spacious, practical and well-equipped family car. It’s more desirable than the Meriva it replaces, but its positioning alongside the similarly-sized Mokka remains unclear despite Vauxhall’s best efforts to distinguish the two. The driving experience is similar and a little uninspiring, but for many Crossland buyers the excellent packaging and comprehensive infotainment system will be the biggest draw. A more modest engine should suffice for most, and in a less expensive trim, too.

If you needed proof the conventional MPV’s days were numbered, then this new Vauxhall Crossland X is exactly that. The boxy Meriva is gone, replaced by a more stylish SUV-inspired family car.

Vauxhall tells us it’s a very important car for the brand, despite having already filled the small crossover segment with the established Mokka X. But while that car is considered a “bold 4x4”, the front-wheel drive Crossland is a more functional model, targeted at young families with an active lifestyle. Here, we see if the differences are discernable as we test the Crossland X for the very first time in high-power 1.2 turbo guise.

• The best crossovers and SUVs

This car is the first model born out of the recent PSA Peugeot Citroen alliance, though development began long before the news was made public earlier this year. It sits on a modified version of the Peugeot 2008 platform, using a similar range of engines and gearboxes but with a totally unique cabin and wildly different exterior styling. 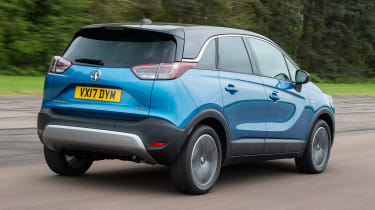 Inside, you’re immediately taken by how bright and airy the new Crossland X feels. There’s loads of space up front thanks to the steeply raked windscreen that stretches out beyond the large dashboard, while in the rear there’s enough head and legroom for even the tallest adults. It’s clearly been designed with practicality in mind, a trait also evident when you open the boot.

As standard, all Crosslands get a 410-litre load bay with the rear seats in place. That’s already 54 litres more than you’ll find in the Mokka X, but spec the Versatility Pack and you’ll be able to also roll the bench for and aft depending on your needs. Our car didn’t feature the £300 option, which also adds adjustable seat backs and a more practical 40:20:40 split-fold function, but Vauxhall tells us this can improve cargo space by as much as 110 litres. On paper, the Crossland is quite a bit smaller than the Mokka with all the seats folded flat (1,255 litres vs 1,372 litres) but in reality there’s not that much in it.

In addition to the sizeable boot, you’ll find handy storage and functionality solutions dotted around the interior including good-sized door pockets, a foldable driver’s armrest and two USB slots in the front. All cars come with a seven-inch infotainment screen that’s crystal clear and easy to use; packed with features from Apple CarPlay to Android Auto, as well as Vauxhall’s innovative OnStar services.

Elsewhere, every Crossland X gets climate control, 16-inch alloy wheels and cruise control, as well as LED daytime running lights and a front camera system with lane departure warning and traffic sign recognition. Buyers can step up from SE to SE Nav (adding sat-nav, of course) for £700, though the excellent smartphone connectivity options mean this isn’t really necessary. 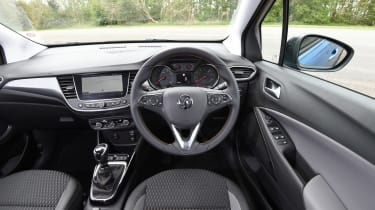 Our Elite car adds luxury features such as digital dials, tinted glass, bigger wheels and lashings of chrome. Buyers can also specify a contrasting roof and door mirrors (in black, grey or white) at no extra cost. The interior, while well built, doesn’t have the same level of tactile plastics as you’ll find in a similarly-priced Astra, but it’s smartly designed and moves things on from the Mokka’s button-biased setup.

But with many new Vauxhalls posting rave reviews, we were also intrigued to see how the new Crossland X stacks up against key rivals on the road. However, while it can happily challenge a Citroen C4 Cactus for space and standard kit, the driving experience is less inspiring.

It seems inheriting a PSA platform hasn’t given Vauxhall’s experienced engineers the freedom to tune it to their tastes – resulting in light and lifeless steering and a soft body that suffers both in town and on the open road. Vauxhall says it’s more crossover than SUV, so four-wheel drive isn’t even an option. 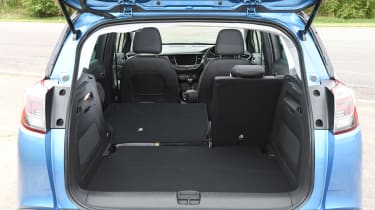 While a raised ride height usually provides a more cushioned ride, the Crossland’s suspension can’t react fast enough to sharp jolts around town, sending reverberations through the chassis and into the cabin. It works much better on the motorway and over larger undulations, but show it a corner and the body will lean under heavy loads. It’s no better or worse than the Mokka – and indeed sits on a par with many of its rivals – but with the new Astra and Insignia proving so well resolved, we expected more from Vauxhall’s latest SUV.

Engines range from a naturally aspirated 1.2, through a pair of diesels and two turbo petrols. On SE cars, the step from the entry-level unit to the 108bhp turbo is £1,320, which spread over three years on a monthly PCP deal will be well worth the extra. 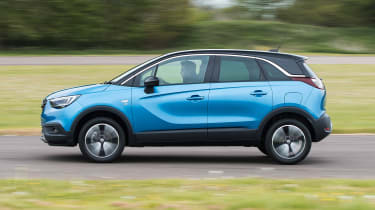 We tried the range-topping 128bhp 1.2-litre three-cylinder turbo petrol engine, which proved punchy and refined, taking just 9.1 seconds to reach 62mph. It very rarely gets bogged down, serving up plenty of power throughout the rev range, and while it rattles a little on start up, the Crossland settles well at higher speeds. There’s very little wind noise around the A-pillars and road noise is kept to a minimum, too.

Our car will return 55.4mpg and emit 116g/km versus the lower-powered turbo’s 57.6mpg and 111g/km. Given Vauxhall predicts 65 per cent of cars will go to retail customers, those higher CO2 emissions won’t affect how much you pay in road tax, however. Business users are split by just one Benefit in Kind (BiK) band, and while the diesels will use less fuel, they remain subject to a three per cent surcharge – putting them on a par with the petrols for company car tax.