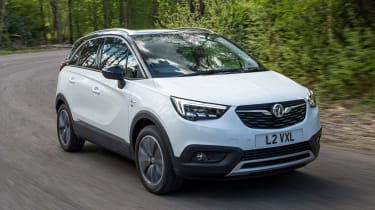 The entry-level diesel Vauxhall Crossland X serves up good fuel economy and decent low down grunt. The two three-cylinder turbo options will be more popular, though, thanks to their lower list prices and improved refinement. However, regardless of engine and trim, all models are well equipped and practical – two key considerations in a competitive area of the market.

The Crossland X is the latest addition to Vauxhall’s expanding line-up of SUV models – touted as a more versatile, practical, and economical alternative to the Mokka X. We’ve already driven the top-spec petrol, but does a diesel make more sense?

Those looking to maximise Vauxhall’s promise of an efficient crossover will naturally turn to one of Crossland X’s two stop-start diesel options at launch. There’s a pair of 1.6-litre four-cylinder units to choose from, with either 98bhp or 118bhp – and it’s the lower-powered version we have here on UK roads for the first time.

On paper, this 1.6-litre ecoTEC BlueInjection diesel can do 0-62mph in 12 seconds and hit a top speed of 112mph. As ever, diesel power means that even this 98bhp engine records an impressive claimed torque figure of 254Nm, which peaks at just 1,750rpm. It is, however, not an engine exclusive to Vauxhall, and finds its way into the Crossland X as a result of the recent PSA Group buyout. It’s the same 1,560cc unit found across the PSA Group’s production portfolio, badged as a BlueHDI engine in the Peugeot 2008. 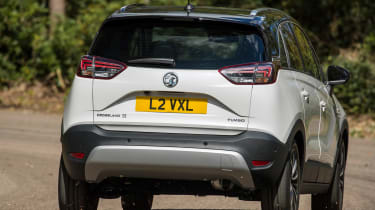 It develops more torque than any of the petrol options, and feels convincingly fast at low revs – with plenty of shove from slow speeds. However, stretched beyond 3,000rpm, that cushion of torque does disappear, quickly exposing the engine’s low overall power output.

It’s not the most refined engine, either. Rev it beyond the narrow, low torque band, and rough edges appear. Combined with a five-speed gearbox, it means that the 98bhp Crossland X diesel isn’t as well suited to long motorway journeys as the higher-powered six-speed unit.

Vauxhall claims that this car is capable of returning 76.3mpg on a combined run (the 118bhp car will do 70.3mpg), making it the most frugal version in the range. It’s also the cleanest in terms of CO2 emissions; our test car in range topping Elite trim manages 95g/km CO2 – but on the 16-inch wheels fitted to SE and Tech Line Nav cars, it drops to 93g/km.

For company car drivers, those smaller wheels see the first year Benefit in Kind (BIK) rate fall by one per cent, but the 20 per cent rate only places it on par with the cheapest turbocharged petrol engine. The 1.2 turbo is cheaper to buy for private buyers and it’s more powerful, too. With the new VED band changes, there’s no tax advantage to be gained with the sub-100g/km CO2 figure, either. 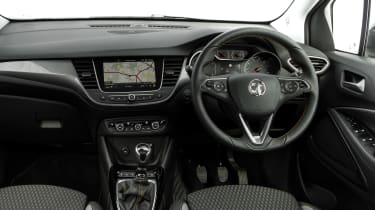 Regardless of which engine you go for, all Crossland X models offer a big, bright and spacious cabin with room for five and their luggage. There’s loads of room up front, and head and leg room in the rear is impressive. You’ll find a 410-litre boot and plenty of practical touches dotted around the cabin. Fold the seats flat and the 1,255-litre load bay is 85 litres larger than in a Citroen C4 Cactus.