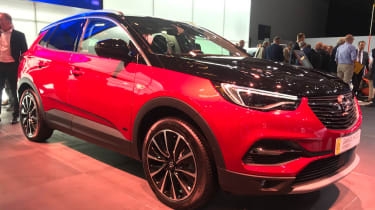 UK prices for the new Vauxhall Grandland X Hybrid4 - the British brand's first plug-in hybrid SUV - have been revealed. It's available to order now, priced from £35,590, with first deliveries due in January 2020.

Three versions of the new range topping SUV have been confirmed. That £35,590 price tag is for the Business Edition Nav Premium version of the car, while SRi Nav and Elite Nav models cost £40,300 and £45,450 respectively.

The Grandland X Hybrid4’s powertrain comprises a 197bhp 1.6-litre turbocharged four-cylinder petrol engine and a pair of electric motors (one for the front axle and one for the rear), resulting in a combined system output of 296bhp and 450Nm of torque. 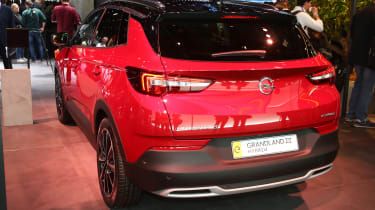 The combustion engine feeds its power to the front wheels via an eight-speed automatic transmission, while the rear-mounted electric motor provides the Grandland X Hybrid4 with all-wheel drive. As a result, the sprint from 0–62mph takes a claimed 6.5 seconds, while the top speed stands at 136mph, or 83mph in full electric mode.

Power for the electric motors is supplied by a 13.2kWh lithium-ion battery, giving the Grandland an all-electric range of 32 miles. The batteries can be recharged in two hours using an optional 6.6kW charger, while Vauxhall will also offer a 7.4kW wallbox for the home. A 3.3kW charging cable is included.

As well as a Zero Emission mode, drivers have the choice of four additional drivetrain settings. Sport mode maximises power output from both the combustion engine and electric motor; Hybrid mode provides optimal efficiency from the PHEV system; a four wheel drive mode, claims to provide better off-road performance, while E-Save mode, reserves up to 12 miles of electric range for use at the end of a journey.

To mark it out in the Grandland X range, the PHEV features a unique black bonnet - but buyers can spec a body coloured alternative as a no-cost option.

Later this year, the Grandland X Hybrid4 will be joined by a new, all-electric Vauxhall Corsa. This will be followed by fully-electric variants of the new Vivaro Life MPV and Vivaro van, as well as a successor to the Mokka X crossover.