We get behind hi-tech new engine set to power the Insignia. 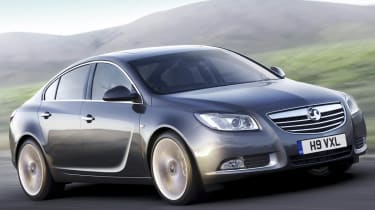 There’s no doubt HCCI brings great benefits. Even though the car we drove was a prototype, it feels remarkably close to production. While work still needs to be done in refining it, the smooth power delivery and gains in fuel economy are clear. HCCI is some way off – bosses at Vauxhall won’t commit to a production date, but we’d guess it will be another two years away. Yet it shows there’s plenty of life in the petrol engine yet.

It’s the most exciting family model that has ever worn the famous Griffin badge – and the Vauxhall Insignia is getting an engine to match!

Auto Express has been given early access to a hi-tech new petrol unit that will appear in the forthcoming Ford Mondeo rival, and it promises an amazing blend of performance, fuel economy and low emissions.

It’s called HCCI – the initials stand for Homogenous Charge Compression Ignition. And the new system will join Vauxhall’s line-up of small-capacity turbocharged petrol and diesel eco­FLEX engines to provide the Insignia with an unbeatable range of environmentally friendly powerplants. Likely to join the range in around 2012, there's still a long wait expected of the engine, but from our early test, there's much to be excited about.

An HCCI engine is effectively two motors in one. At low speeds, it means a petrol unit can work just like a diesel (as explained here). This in turn increases efficiency – the overall result is a 15 per cent improvement in fuel economy.

We drove a 154bhp 2.2-litre Ecotec-powered Vectra fitted with the HCCI system. Although there are no official figures, it should return 43mpg (up from 37mpg), while emissions are set to fall by 30g/km to only 150g/km.

Engineers claim that they are not yet satisfied with the level of refinement offered by this version of the new car. However, the most obvious difference is the transition from a quiet, diesel-like rattle at low throttle to a normal petrol engine hum when you put your foot down – there’s no obvious jerk in power delivery.

Drive gently, and the engine stays in HCCI mode, although the slightest squeeze of the accelerator moves it immediately into conventional spark ignition running. After this, it takes a while for the powerplant to switch to the HCCI settings – something engineers at the firm say will improve once they’ve revised the control software.

When all the bugs have been ironed out, the 2.2-litre unit will mean the Insignia is not only a fast car, but also fuel-efficient and clean. And if HCCI is the future for petrol engines, things are looking very bright.