Does a thirsty V6 petrol turbo make any sense in this day and age? We try insignia range-topper to find out 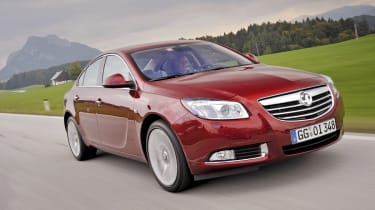 The range-topping Insignia is an excellent motorway companion and loaded with gadgets. Four-wheel drive and clever adaptive suspension ensure decent handling, too. But the powerful engine is thirsty, dirty and compromised by the automatic gearbox. The 2.0-litre turbo variant delivers very nearly as much pace – for considerably less money. Rival: Mondeo Titanium XJust as Vauxhall does with the Insignia, Ford trumpets the luxury of the £26,645 flagship 2.5-litre Mondeo. Power goes to the front wheels only, yet the car is still capable of 0-60mph in 7.3 seconds. Fuel economy is reasonable, at 30.4mpg, and there’s a manual option.

Back in the Eighties, a petrol V6-engined flagship topped every large family car range. In recent years, though, big, thirsty powerplants have fallen out of favour as diesels or small petrol turbos take centre stage with their lower emissions and better fuel economy.

As those factors top Vauxhall’s agenda for the Insignia, its new family car is available with a range of such units. But does the flagship version follow the trend?

Not really. In true Eighties style, it uses a 256bhp 2.8-litre V6 turbocharged petrol motor. The newcomer returns less than 25mpg and sits in the top road tax band G, thanks to CO2 emissions of 272g/km. So it won’t be on many consumers’ shopping lists – particularly fleet buyers. Perhaps it will convince as a performance car?

There’s certainly enough technology on board. The flagship has Vauxhall’s new four-wheel-drive system as standard, plus its FlexRide adaptive damping. The latter can adjust body roll and throttle and steering response to match the driving conditions.

On the move, the V6’s 350Nm torque output makes itself felt, although the six-speed auto transmission does its best to hamper responses. Instead, the car’s primary aim seems to be cruising comfort – and it does very well, changing ratios slickly. Put the lever in Manual mode, and you get decent in-gear pace, but it seems like a lot of effort. In the end you leave it in Drive. A normal manual shifter is standard on the Continent, and it’s a more lively proposition.

Still, the V6 is extremely refined, offering a crisp rasp under power, but settling down to a whisper on long hauls. As with other Insignias we have driven, the ride is supremely comfortable. Add the excellent noise insulation, and there are few better motorway mile-munchers around.

In corners, it’s much more convincing as a performance car than the firm’s old Vectra VXR. The four-wheel drive and FlexRide constantly adjust the distribution of power and suspension stiffness, so there is always lots of grip and great composure. The Insignia is agile with precise steering, too. Yet there isn’t the same degree of connectivity you get from a Ford Mondeo. The feedback through the wheel is a little artificial.

Still, the V6 Turbo model is likeable, especially when you consider its handsome looks, premium-quality cabin and generous standard kit tally. A powered driver’s seat, satellite navigation and adaptive headlights are standard on our car. With average fuel economy and high emissions, though, its appeal is limited.