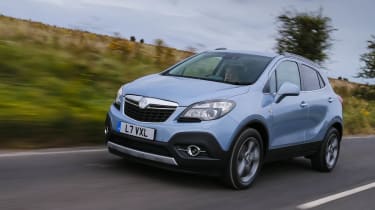 The Vauxhall Mokka is a good-looking crossover that combines great practicality with low running costs. It's reasonably good to drive, handling well for a car in this class, but while the diesel offers plenty of pulling power, it's not the most refined engine. Cheap interior trim further lets the Mokka down.

The crossover market is growing rapidly, and the new Vauxhall Mokka aims to take a slice of the pie from the Nissan Juke and Skoda Yeti. But can it compete with such strong rivals?

The Mokka is larger than the Juke yet smaller than a Nissan Qashqai, and sits below the Antara in Vauxhall’s range. There's a choice of two and four-wheel-drive versions and a range of petrol and diesel engines – our front-wheel-drive Exclusiv CDTI model is tipped to make up more than half of all Mokka sales.

On the outside, the Mokka has the chunky SUV looks buyers in this market demand. There's a sporty, coupe-like profile and loads of ground clearance, backed up by off-road features including side-protection mouldings and an alloy skid plate up front. Entry-level S models will have 16-inch wheels, but this mid-spec Exclusiv and the flagship SE get 18-inch wheels.

As well as the larger alloys, Exclusiv trim adds foglamps and parking sensors all round, plus Bluetooth and USB connectivity, electric windows front and rear and climate control. It misses out on the top-spec SE’s leather seats, adaptive headlamps and privacy glass.

The Mokka scores on space as well as kit. No matter where you sit, there’s loads of head, elbow and legroom. There are eight different seating configurations to make the most of the 1,372 litres of luggage space, which is more than in the Juke or Qashqai.

The firm, supportive cloth seats are a match for the durable dash materials, which look and feel cheap in places. But overall, the interior is well presented. The familiar Vauxhall centre console has myriad buttons with white-on-grey lettering and chrome-rimmed gauges, while the centre of the leather-wrapped steering wheel houses cruise control and audio switches.

Turn the key and the 128bhp 1.7-litre four-cylinder turbodiesel rumbles to life with an old-fashioned rattle. It’s not very refined, but drive on the motorway and you'll see why this will be the best-selling engine.

While it doesn't have loads of torque, the diesel's 300Nm output comes in at 2,000rpm to give the Mokka strong overtaking and pulling power – helped by the six-speed manual gearbox. And unlike automatic models, the manual Mokka comes with stop-start, which helps it achieve 62.8mpg economy and 120g/km CO2 emissions – more than the most efficient Juke on both counts.

Also impressive is the Mokka’s ride and handling. It has excellent grip, a soft yet well damped ride and good body control around corners. While the electric steering is a little vague, this Vauxhall is easy to position on the road and is remarkably stable.

So is the Mokka the new crossover king? On paper, it looks good, with a handsome design, class-leading space and low running costs. There’s lots of equipment and reasonable build quality, and the price adds to the appeal. But it faces a real challenge against such talented rivals.