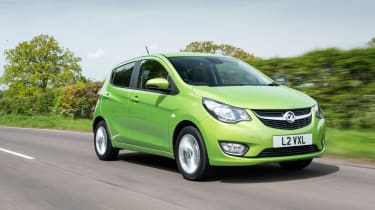 The Viva uses tech from elsewhere in the range, but although these components have proven reliable, the brand doesn’t have the strongest reputation. Vauxhall regularly finishes in the lower half of the Driver Power survey, while its dealer network does equally poorly.

The Viva is a relatively simple car, so there’s little complex electrical equipment to go wrong. Be aware if you’re buying used that these types of cars are often bought by driving schools, so engines, brakes and clutches can have a hard life.

When it comes to safety, the Viva is a pretty good performer. Stability control, six airbags, tyre-pressure monitoring and lane-departure warning are all fitted as standard on even the basic SE variant.

However, a lack of any autonomous braking features to reduce the likelihood of town-speed shunts mean the Vauxhall could only manage a four-star Euro NCAP crash test rating in 2015, while a re-test under the stricter test regime in 2017 saw that rating revised down to three stars, with lower scores in all four categories.

Vauxhall dropped its class-leading lifetime warranty in 2014, so the Viva makes do with a fairly standard three-year, 60,000-mile guarantee. While that’s on a par with the likes of VW’s up! and the Suzuki Celerio, it trails the Hyundai i10’s five-year warranty and the Kia Picanto’s seven-year agreement. That being said, there’s very little in the Viva to actually go wrong, and the powertrain and equipment on offer is well-proven.

Despite the average warranty period, the good news is that Vauxhall’s dealer network is extensive and parts are both reasonably priced and abundant. The Viva needs attention every 12 months or 12,500 miles, which isn’t the longest service interval around, but it shouldn’t be expensive for dealers to carry out a service given how simple the city car is.