The Volkswagen CC 4-door coupe is being replaced by the bigger, plusher Volkswagen Arteon. We take the prototype for a spin... 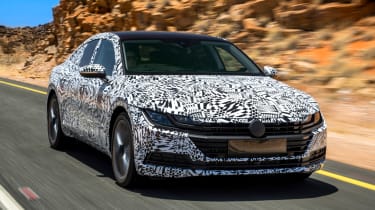 The Volkswagen Arteon is part of VW’s push to become even more premium, and is said to rival BMW’s 5 Series and Audi’s A6. It certainly seems to have plenty of style under that disguise and a handy amount of space. But although we like the engine and gearbox combination, we hope the ride improves before the car eventually goes on sale.

The Arteon is the car that VW says encapsulates its new, more emotional approach to its design, and product development boss Dr Franck Welsch is clearly excited by it. “Did you see how the new front looked when the car is in your rear-view mirror?” he asked. “It’s got much more purpose with the wider grille running into the headlight units, which get a new LED look.”

Sadly, we haven’t had the view of an undisguised car that Dr Welsch has, but even behind the swirly camouflage you can see the shape of a large-ish five-door with an Audi A5-style curve to the rear. And yes, that nose does look interesting.

Although the Arteon is a replacement for the unloved Volkswagen CC, it’s bigger and, VW hopes, more upmarket to take the fight to the likes of BMW’s new 5 Series. 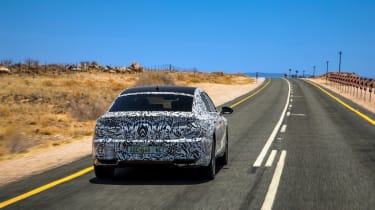 The brand says the MQB-based car sits in size between the Audi A5 and A7 with a wider track and longer wheelbase than the Passat. But inside it’s all Passat, with great quality (even on our pre-production car), clear controls and the now-familiar digital virtual cockpit. Our model also had the impressively updated infotainment touchscreen, plus a choice of wood and other finishes is promised. Space in the back is excellent, and the bootlid opens wide to give a 500-litre capacity that rises to 1,700 litres if you fold the rear seats.

The range of Arteon engines includes familiar TDIs with power from 148bhp to 236bhp, plus the new 148bhp 1.5-litre petrol that will debut in the new Golf.

We drove the two other petrol models, both 2.0 litres, one with 188bhp and a US-only 276bhp car. While the engines were smooth, with decent punch, what impressed more was a new version of VW’s seven-speed DSG box. It’s been updated to reduce initial hesitation from a standstill and for faster shifts, and is far quicker to respond and slicker to use. 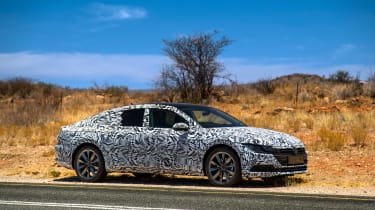 It adds to the impressive refinement, although the ride on both cars, even the US-spec model with active dampers, was too firm. Engineers told us some of this could be down to the high temperatures in South Africa causing an increase in tyre pressures, but it was also clear some chassis tuning is still needed before the car goes on sale next summer, after its debut at March’s Geneva Motor Show.