New Volkswagen camper is better than ever, but the high price will put some off 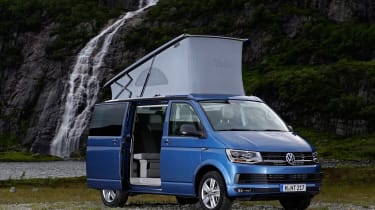 Without reinventing the Camper Van, the VW California T6’s raft of slight improvements over the T5 make it a significantly better proposition overall. While the basic architecture remains, the ‘premium’ cabin option makes things feel much more upmarket, which added to improved economy and refinement, makes this generally seem a much more polished product than ever. However, the high asking price remains prohibitive, especially the Ocean version: £50k is an awful lot when you could have nine-tenths of the experience for half the price with a used T5 California.

On the one hand, the T6 VW California is a very expensive Volkswagen Transporter van conversion. On the other, it’s the iconic Camper Van reincarnated, which makes it extraordinarily cool. You may have already determined which camp you fall into, and that will define how you feel about an asking price that can exceed £50,000.

That huge number is the single most off-putting thing about the California, but to set up camp early, we’ll say already that this latest T6 generation model very nearly justifies the price tag – it’s very good indeed.

Based on the brand new T6 Transporter, only recently launched and hitting UK van depots from September, California order books open in August for later 2015 deliveries.

If you’re familiar with the T5 California (or indeed the Transporter), you may already have noted a striking familiarity about all this. If you haven’t – there really is one. That’s because the T6 Transporter van was developed along an “if it ain’t broke” policy, so Volkswagen kept all the fixed points of the chassis, most of the body panels and the internal dimensions exactly the same. 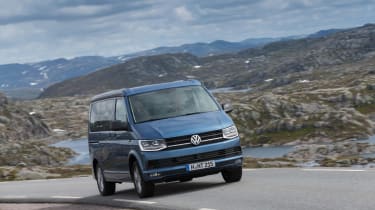 That extends to the California’s internal fittings, meaning the little kitchenette in this T6 Ocean model is basically the same as the T5’s was, just with a couple of extra rails and cup holders. There have been tweaks to the front and rear exterior styling, but the real work went into improving overall refinement, ride quality and cabin flair, and adding more of the technology that makes Volkswagen’s passenger cars so alluring.

For a start, the California gets Euro-6 emissions-compliant diesel engines, meaning economy is improved and CO2 emissions lowered across the range. So, while the 138bhp 2.0 TDI T5 California averaged 39.2mpg, this T6 equivalent, with 10bhp more, returns 44.1mpg.

More than that, all the new engines contribute to an overall sense of refinement bordering on remarkable for what is essentially a diesel van. All three available engines are 2.0-litre TDI diesel units, but outputs are 100bhp, 148bhp or 201bhp – the last of those being the most powerful ever put into a VW van. 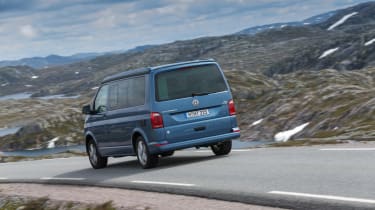 But actually, pound-for-pound it’s the 100bhp engine that’s the most impressive, because Volkswagen has tuned it in the spirit of the old Pumpe Duse diesels from the Mk IV Golf era, concentrating all the torque in a thin band near the bottom of the rev range, so there’s instant, flexible pickup.

On that basis the 201bhp engine doesn’t feel twice as powerful, although there’s no denying its turn of pace. As ever, though, the middling 148bhp diesel is the best overall, superbly subdued at lower revs, far punchier than its 14.2-second 0-62mph sprint suggests, and silkily smooth – for a diesel, anyway. All California models are available with a seven-speed DSG automatic, while the two higher-powered engines can be specified with 4Motion four-wheel drive.

Despite an overarching sense that little has changed from the T5 California to the T6, that’s not exactly a fair assessment – Volkswagen counts 6,000 changes from the T5 Transporter to the T6, all of which carry over to the California. They just happen to be mostly suspension, engine and technology improvements, most of which you can feel rather than see. 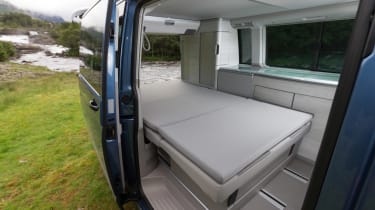 And in this case, familiarity is no bad thing, especially rearward of the front seats, where the California is really easy to use: the roof can be popped up and the rear bench turned into a double bed in no time at all, which is especially appeasing on a wet, dark field in the middle of the night.

The main change at the front is the addition of a ‘premium’ cabin, standard with Ocean models but not available with Beach (these are the only two trim levels). It results in a significant upward ambience shift, dotted with glossy surfaces and soft-closing compartments – but unfortunately still none of the soft-touch surfaces that make certain Volkswagens feel so premium, and that you might expect to see in something of this price.

Without this cabin, the van-like driver ergonomics and open storage compartments conspire to make Beach models feel less a luxurious MPV and more a tarted-up van. Beach models don't feel as good as their high price suggests they might - it costs from £37,657. 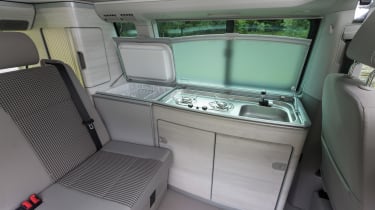 Beach model do without the rear kitchen but have five seats as standard, a manual pop-up canvas roof and a foldout double bed that will sleep two. An extra two seats are optional, though these need to be removed before the lower bed can work.

Ocean specification, formerly known as SE, is the Camper we’re all familiar with, complete with twin gas hobs, a sink, a fridge and a full suite of wood veneered storage units. It seats four, sleeps four (its pop-up roof is electrically operated), and comes with a side awning for outside shelter from the rain – a standard feature on UK Beach models, too. Prices for the California Ocean begin at £47,840.

And while it’s true that both of those prices look high, in both cases the specification sheet at least justifies some of the expense. All come with Bluetooth, DAB digital radio, climate control (three-zone in the Ocean), alloy wheels, LED taillights and an auxiliary heater to stave off the midnight chill.