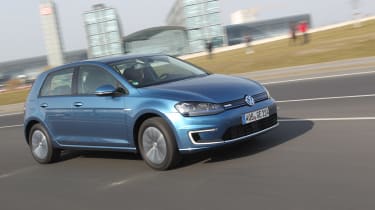 As an electric car based on an existing model, the Volkswagen e-Golf offers something familiar to zero-emissions buyers. It’s quieter, smoother and, of course, cheaper to run than a conventionally powered Golf, but you have to be willing to sacrifice range and also pay more than for the innovative BMW i3.

If the Golf GTE adds a performance focus to VW’s plug-in hybrid hatch, the new Volkswagen e-Golf brings a touch of familiarity to the world of electric cars.

It’s a welcome arrival in a market kick-started by the Nissan Leaf and then invigorated by BMW’s i3. The e-Golf costs £25,845 after the £5,000 Government grant – so it’s £165 pricier than the i3, but not that much more expensive than a traditional Golf.

This all-electric model gets an auto box and air-con as standard. It’s near-silent in operation, and the ride is as cosseting as you’d expect from a Golf. There are five levels of energy regeneration, and the maximum range is 118 miles. However, that’s only really achievable if you’re using Eco or Eco+ modes – the latter drops power from 113bhp to 94bhp and disables the air-con.

Leave it in Normal mode, though, and the car feels far quicker than its claimed 0-62mph time of 10.4 seconds. A full charge takes eight hours from a British Gas-installed charger at your home, but ultimately – like the Leaf and i3 – the e-Golf is only suitable for short trips and predictable journey patterns.