Final report: The Volkswagen e-Golf has cleaned up, but will it continue to do so as tech evolves?

The Volkswagen e-Golf is such a great car that it will be tough for future EVs to match its sheer usability. If you can afford to buy one, at £28,230, it’s still a top electric model.

Our VW e-Golf will soon be leaving the fleet – but we’re looking forward, not back. If you believe the hype, we’re about to enter a new golden era for EVs. The likes of VW and Mercedes have ‘bespoke’ creations on the way in the next 18 months, Tesla continues to innovate and then, on the slightly more distant horizon, there’s Sir James Dyson.

Dyson confirmed late last year that he intends to bring an electric car to market, probably in the second half of 2020 or early 2021. He’s not working on it as a joint venture; it’ll be a Dyson through and through. When I asked him whether it’d look like a ‘normal’ car, or if it would try to redefine the design of the genre in the same way as his vibrantly coloured vacuum cleaners made traditional brands appear old hat, he said it’d definitely “look like a Dyson”. The game is on, in other words, for a ground-up reinvention of what an electric car can be.

And yet, as our time with an e-Golf draws to a close, I’m reminded on an almost daily basis of the scale of the task that lies before James Dyson and the 400-odd engineers he has working for him on the project. 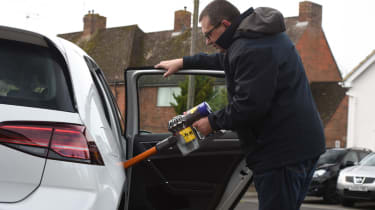 The e-Golf is, VW tells us, the last of its kind. It’s a ‘normal’ car, on the same set of chassis underpinnings as any diesel or petrol Golf, but with a compact electric motor fitted. This is to say that, powertrain aside, it’s demonstrably ordinary, but also brilliant.

I’ve eased through several thousand miles in the e-Golf over the past few months, and I can’t recall any point where I felt like it needed reinventing from the ground up. We can assume that when the I.D. hatchback does replace this car, it’ll have a similar overall footprint but a much longer wheelbase that’ll help to free up cabin space. This’ll give the I.D. a pretty airy feel inside, I don’t doubt. But will it deliver a hammer blow to practicality? I’m less sure.

Nor is there much to complain about on the e-Golf’s quality front. You can find harsh plastics if you look hard enough, but for the most part the combination of squidgy materials and hard-wearing fabrics on the seats has been bulletproof: just the right side of durable, without ceding too much to frivolous luxury. We don’t seem to have picked up any nasty rattles during our time with the car, either. 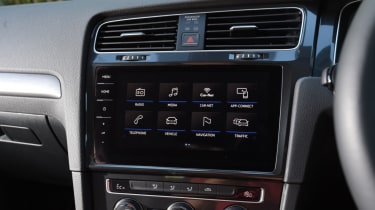 There’s tech if you want it, too. I’m still not entirely convinced by the VW’s flagship 9.2-inch touchscreen navigation system – I’d like a few more physical buttons to give me shortcuts between the relevant menus – but there’s no denying how crisp the display is, and how smoothly it runs. The Active Info Display – the 12.3-inch digital instrument panel that’s also standard fit on the e-Golf – is equally impressive.

Yet if you put the electric powertrain to one side, the rest of the e-Golf package has the same set of parameters that’s been honed over seven (and-a-half) generations of family car, all the way from 1974. It’s the epitome of what a family car can be – just about spacious enough, just about practical enough, more than comfortable enough.

That electric powertrain has been, in the most part, capable enough over the past few months, too. True, the e Golf is not my only family car, so I’ve always had the back-up of a petrol-powered hatchback, but I’ve long since become comfortable enough with the predicted range to take a pragmatic view about charging. 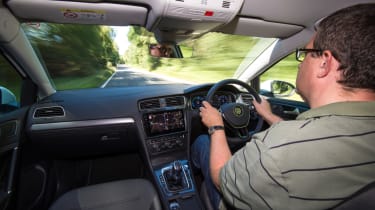 If there’s, say, half of the battery left on a Friday evening and I know I’m heading towards a quiet weekend, I simply don’t feel the need to plug it in. Thus far, my trust has been repaid.

So while Dyson’s latest vacuum is great for cleaning up the e-Golf’s cabin, coming up with a vehicle that trumps the VW on its ability to cope with family life in general may well prove to be the British entrepreneur’s biggest challenge to date. It’s invention versus evolution. 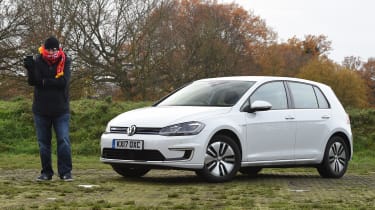 After a few months behind the wheel of the Volkswagen e-Golf, the Car-Net app has proven its worth

Winter’s here – and this brings an especially cold chill for electric vehicle owners, who, having got over the basic concept of range anxiety, now have to take a second gulp as their EV’s normal range shrinks by a few miles.

Part of the problem, of course, is that heating up a car from freezing temperatures takes a lot of energy. And merely sticking on a few extra layers of clothing for your daily commute won’t quite solve the problem either; you still need electricity to defrost the windscreen and rear glass, after all.

Fortunately, Volkswagen has an app for this. In fact, the system, called Car-Net, works across not only Apple and Android phones, but also in your web browser. It feeds through a constant stream of information from the vehicle to your desktop or smartphone, via the security of the cloud – and allows you to send configuration instructions back to the car. 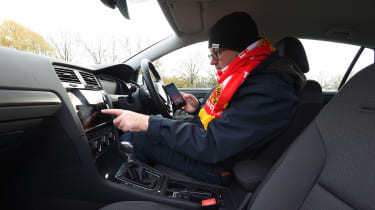 In other words, this means I can sit in the Auto Express office and check that the e-Golf is still safely parked and locked. But crucially in the winter months, Car-Net also allows me to save ‘departure times’ and tell the e-Golf to warm up the cabin and defrost the windscreen.

The joy of this is that the whole process can occur when the car is plugged into my Chargemaster point at home, so it doesn’t cost me a single mile of range. I’ve also started to override the system a bit when I know that I’ll have more than enough battery capacity to get me home anyway; there’s nothing quite like getting into a pre-warmed car after a long, cold walk. 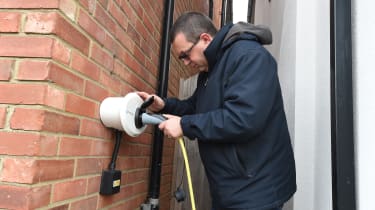 Every week there seems to be another headline saying that electric vehicles are becoming mainstream – that left-field ‘bespoke’ choices such as the Nissan Leaf, BMW i3 and Renault ZOE are about to be joined by EVs so normal in appearance and approach that only clued-up car fans will know that they don’t have a combustion engine under their bonnets.

To put the theory to the test, we’re going to be spending the next six months using arguably the most mainstream car of all, in pure-electric form: the Volkswagen e-Golf.

VW updated its all-electric hatchback along with the rest of the range when it introduced the ‘Mk7.5’ version of the Golf earlier this year. Not only did it benefit from many of the interior tweaks that were introduced on the conventionally powered models, it also received a useful boost in its battery capacity, made possible by the ever-improving energy density of the cells used by car manufacturers. 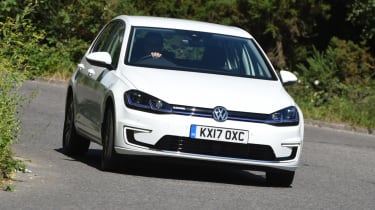 As a result, the e-Golf’s theoretical range has risen from a miserly 119 miles to an altogether more promising 186 miles. Fast charging is included, too, allowing you to take the battery from flat to around 80 per cent of charge in just 45 minutes. Even assuming that Volkswagen’s range claim is optimistic, the e-Golf ought to be able to manage around 130 miles in the real world.

And as with all electric vehicles, that sort of gain in claimed range will be enough to break down the resistance of a few more consumers who’ll have worked out that the e-Golf is now able to fit into their lifestyle.

I’m already pretty much there, frankly. My wife runs a conventionally powered hatchback as her daily drive, so that’s always available as a back-up if we need to travel greater distances. And while my round-trip commute is longer than average, at about 90 miles, that’s still within the Golf’s range.

You pay for this, of course. We’ll get into the nitty-gritty of financing an e-Golf in a future report, but suffice it to say that even with the savings on fuel, you’re unlikely to choose this £32,000 car over a petrol or diesel edition because of purely financial benefits. Stick down a deposit of around £6,000 over three years and 30,000 miles and you can expect to pay VW almost £600 per month for the electric hatch. It’s likely to make more sense as a company car choice. 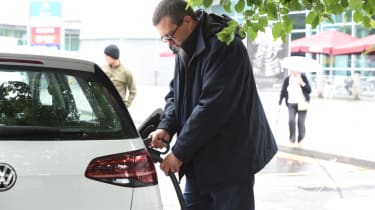 At least there’s plenty of kit on board for the money. The e-Golf gets dual-zone climate control as standard, along with a heated windscreen and VW’s top-of-the-range 9.2-inch widescreen infotainment system. The rest of the package is brilliantly familiar: all of the elements that saw the Golf crowned Best Compact Family Car at our New Car Awards 2017 are there, with soft-touch materials in the right places and a comfortable driving position.

I’m enjoying the flexibility of around 130 miles of range, the ability to pull away from rest with little effort and the fact that this tech is in one of the best family cars ever. I do intend to push the envelope a little; I’ve already visited an ‘Electric Highway’ fast-charging point that’s designed to allow EV owners to use motorways for longer journeys. Infrastructure like this will play a key role in determining when EVs actually go mainstream; so I intend to use the rest of 2017 to check on this part of the experience, as well as the e-Golf’s abilities on the road.