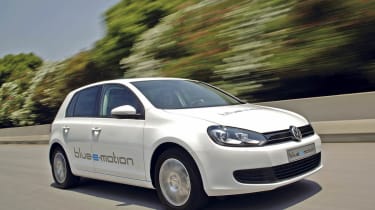 The Golf blue-e-motion kicks off Volkswagen’s range of electric cars, which are due to arrive in dealers by 2013. The line-up will also include a battery-powered version of the Up city car! Despite its restrictive range, the green model carries over the hatch’s polished handling, superb build quality and impressive performance – so it will be an attractive proposition for customers in three years’ time.

Meet the latest member of the electric club. VW’s new battery-powered Golf blue-e-motion looks and feels like a standard petrol-powered model, but does it drive like one? We took it for a spin around the Shanghai grand prix track to find out.

Although a production version isn’t due in showrooms until 2013, the prototype we drove seemed well engineered, and handled impressively.

Inside, the touchscreen display has been adapted to show power flow, while the rev counter is swapped for a kW gauge complete with an integrated range indicator. On the right is a more conventional speedometer, but with a gauge displaying the remaining charge.

Press the start button, hit the throttle and the front wheels spin momentarily as all 270Nm of torque is harnessed from zero revs. You’re then thrust forward.

On the move, the steering feels more artificial than that of the standard Golf, and the nose is a bit lighter, due to differences in weight distribution. Owners have a choice of three driving profiles: Range+, Normal and Comfort+. These configure the power of the electric motor to 67bhp, 86bhp and 113bhp respectively. They adjust the air-con, top speed and battery recuperation strategy, too.

What’s more, by selecting between position D or B on the automatic shift lever, or D to D3 on the steering wheel-mounted gearshift stalk, drivers can tailor the energy regeneration intensity.

All this means that the new car’s range can vary from 60 to 95 miles. Plus, in-gear pace is more than a match for existing petrol and diesel models. When the battery is empty, the Golf can be revived via a plug connector behind the logo on the grille. A full charge takes seven hours from a household socket, or half that from a high-voltage connection.

Rival: Ford Focus Electric Zero-emissions blue oval hatch will beat the Golf to market, going on sale in 2012. No performance figures are available yet, but its lithium-ion battery pack is expected to deliver similar pace.