Can the Volkswagen Passat BlueMotion diesel take down the king of efficiency, the petrol-electric Toyota Prius? 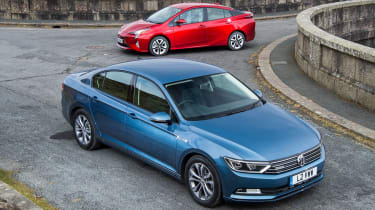 Toyota’s new Prius has seen off all of its hybrid challengers in our group tests so far, but it’s facing a different kind of eco-focused competitor here.

Volkswagen’s BlueMotion line of high-efficiency vehicles has always focused on maximising economy from conventional powertrains rather than hi-tech hybrid systems, and the new model takes this to the next level. VW claims the 1.6-litre turbodiesel Passat emits 95g/km of CO2, although this is still some way behind the Prius’ 70g/km output. But while the German brand’s reputation took a hit after the Dieselgate scandal, you can’t write off this diesel car.

• Most economical cars for sale

The BlueMotion’s impressive frugality means it shines on longer journeys, yet it should also return impressive economy figures around town. Being a hybrid, the Toyota is at its best in specific circumstances, but that doesn’t mean it’s out of its depth as a family car or a business vehicle; this new model promises better fuel economy than ever. Here, we see which type of car is more economical and makes more sense day-to-day. 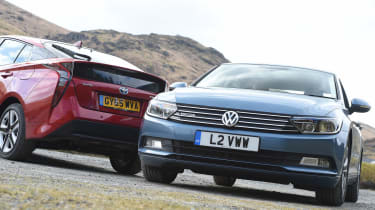 Reducing drag is an effective way of improving efficiency. The VW has a closed-off grille and a bespoke bodykit, while the Prius’ intricate shape manages the airflow over the car in the cleanest path possible. Features like the rubber strip between the bonnet and bumper further reduce turbulence, with a decent drag coefficient of 0.24Cd.

Volkswagen’s diesel is noisy when revved hard, while firmer suspension means there’s some road noise at higher speeds. Toyota has worked hard on its hybrid powertrain to cut decibels, helped by double-glazed windows. However, there is lots of tyre roar on motorways.

The Toyota doesn’t offer as much boot space as the Passat, but its big hatch makes it easier to load than the VW saloon with its smaller opening. With the rear seats down, a big load-through area boosts the Prius’ flexibility further – a bonus in a family car. 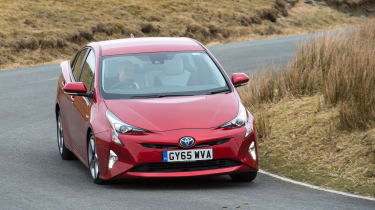 The Prius’ design won’t be to everyone’s taste, but there’s no denying it looks and feels a lot more distinctive than the Passat. However, the big benefit comes from its hybrid powertrain, delivering useful savings over the conventionally powered Volkswagen. The smooth ride and capable chassis mean it’s also good to drive, and now more refined than ever. 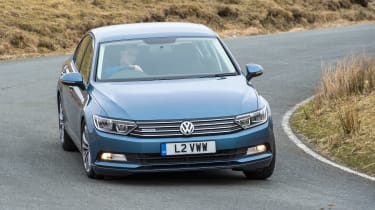 The Passat’s lower fuel economy and higher CO2 emissions mean it can’t compete with the Prius. It’ll be more expensive to run as a result, with higher servicing costs and greater depreciation. The VW is roomier inside and provides a bigger boot in five-seat form, but the Toyota is just as practical and a more efficient solution for day-to-day use. 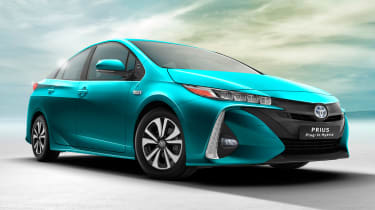 Toyota claims its new Prius Plug-In will return 202mpg and emit 32g/km of CO2. Pricing hasn’t been revealed, but it’ll cost more than the standard car, as it takes efficiency to the next level.