Does smallest diesel work in the latest supermini star? 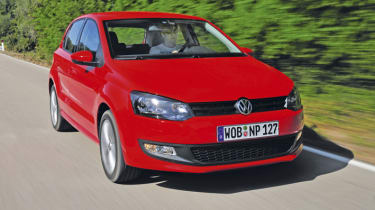 The Polo doesn’t feel like it’s simply a smaller version of the Golf. The newcomer is brilliantly built and good looking in its own way. This entry-level diesel version may not be a hot hatch, but it still offers a great blend of performance and fuel economy. And while a Fiesta is more fun to drive, and provides a bit more all-round sparkle, the Polo’s quality and premium big-car feel shines through.

When it comes to giving buyers choice, VW’s new Polo is tough to beat! As well as an extensive line-up of petrol powerplants – including the cracking 1.2-litre TSI turbo model we drove here – there’s an all-new diesel engine, too.

Replacing the 1.4 TDI and the noisy old 1.9-litre TDI unit is a fresh 1.6-litre TDI common-rail motor from the latest Golf, available in 74bhp or 89bhp form. It’s the less powerful of these that’s expected to be the biggest seller, so Auto Express got behind the wheel to see how it performs.

Before you even start the engine, it’s hard not to be impressed. Even though the new Polo is longer and wider than its predecessor, and packs enough safety kit for an anticipated five-star rating in Euro NCAP crash tests, VW’s engineers have managed to make it nearly eight per cent lighter than before! The stylists deserve a pat on the back, too – the Polo’s look may owe much to the Golf, but it is smart and sophisticated in its own way, and appears distinctive on the road.

Twist the key, and the smooth diesel powerplant underlines this. Gone is the rattle of the old units, and in comes some real refinement. In fact, if it wasn’t for the 1.6’s slightly gruff engine note, you’d be hard pressed to tell it was a diesel at all.

With only 74bhp, it’s no flier off the line – 0-60mph takes around 14 seconds – but the 195Nm of torque provides a broad spread of urge and strong mid-range acceleration. It’s also remarkably quiet when cruising at high speed. The icing on the cake is fuel economy of 67.3mpg and CO2 emissions of only 109g/km.

Under the skin lies VW’s new small car platform, which is also set to underpin Audi’s forthcoming A1. It’s not as much fun to drive as a Ford Fiesta – while the steering is precise, it lacks feedback and, compared to the petrol model we tried, the weighty diesel engine blunts agility. However, what the new Polo does boast is a big-car feel. And that’s its greatest strength. No model in the class comes close to offering such a truly premium experience in a small package.

Rival: Ford Fiesta If you want a supermini that puts a smile on your face, the brilliant Fiesta is it. Drivers will love its engaging dynamics and stylish looks – although there’s not a great deal else to choose between the Ford and the VW.