New VW baby is larger and more grown-up than ever. Can it topple class-leading Fiesta? 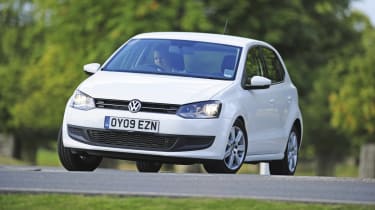 The only maddening thing about the Polo is that finding an area in which to mark it down is virtually impossible. Some will say it seems a little conservative, but there’s no denying it’s nicely proportioned and looks good. A varied and ultra-clean engine line-up offers something for everyone – we’d recommend the petrols over the oil-burners for their added agility and enthusiastic power delivery – while the dynamics could be sharper. But above all other superminis, the Polo offers big-car quality and refinement in a small package. It’s virtually inevitable that it, as with its forebears, will be a runaway success.

The Fiesta is our current Car of the Year, but now the new Polo is here to make sure the blue oval doesn’t have everything its own way. VW will be the first to admit that its new baby trades some of the Ford’s funkiness and cornering ability for a more grown-up feel – so can the biggest little car the German company has ever made cut it on UK roads?

Whereas the Fiesta is a feast of dynamic lines and taut surfaces, the Polo’s styling is aimed to be as inconspicuous as possible. Clean, uncluttered panels lead to a thin horizontal grille and sleek, swept-back headlights – all features that borrow heavily from the Golf, Scirocco and BlueSport Concept. It works well, giving a lean, mean and more chiselled look.

The Polo bears a striking resemblance to a shrunken Golf, and it is longer, wider and lower than the model it replaces. That means head, shoulder and legroom are improved all round, as well boot capacity.

This is now 280 litres, or 952 litres with the rear seats folded flat – only a few square centimetres short of those of the larger-proportioned Fiesta.

But despite the added practicality, engineers have reduced the car’s kerbweight by nearly eight per cent – part of the reason the new Polo delivers up to 20 per cent fuel savings across the board.

A line-up of clean-burning petrol engines includes a pair of naturally aspirated 1.2-litre units with either 59bhp or 69bhp, an 84bhp 1.4 and a feisty 104bhp 1.2 TSI turbo capable of returning 51.4mpg and emitting only 129g/km of CO2 – nearly identical figures to the non-turbo 1.2’s. A seven-speed DSG twin-clutch box can be specified on the 1.4; all the others get a slick-shifting five-speed manual.

Our car had the new 74bhp 1.6-litre TDI common-rail diesel taken from the Golf. And while 67.3mpg and CO2 emissions of 109g/km are impressive, it’s this oil-burner’s refinement that steals the show.

It won’t win any drag races, but 195Nm of torque is plenty on motorways and in town. However, sluggish throttle response below 2,000rpm will have you swapping down a cog to keep up with traffic.

Beneath the surface you’ll find VW’s new small-car platform, which is also set to underpin Audi’s imminent A1 supermini. Turn in sharply and the Polo can’t match the poise and precision of a Fiesta, but VW clearly wasn’t concerned with that, instead concentrating on giving it a more mature feel.

Suspension settings are beautifully judged, letting the car corner confidently yet shake off cracks and holes in the road with the skill of a much larger car.

And that’s a sensation which continues in the cabin. While it’s a fairly sombre and toned-down affair, the quality feel is undeniable. No other model on the market offers such a premium driving experience in a small and affordable package.

Four trim levels will be offered on the five-door in the UK: S, SE, Mode and SEL. Prices will start from £10,035 for the 59bhp 1.2-litre S when it goes on sale in October, undercutting the cheapest five-door Fiesta by £1,495.

A three-door will hit showrooms in December, costing around £1,000 less across the range, while the new BlueMotion, available from 2010, will set new standards for a combustion-engined car, with economy of 85.5mpg and CO2 emissions of 87g/km.

Rival: Ford Fiesta Superb dynamics, eye-catching style and a roomy cabin have helped make the Fiesta our 2009 Car of the Year. The sole let-down is that Ford refuses to confirm a hot ST version is on the way!