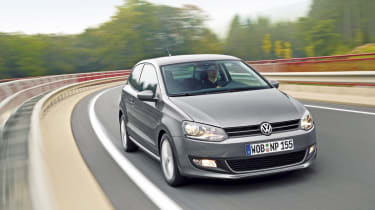 There’s lots to like about the new Polo, which seems to be a car for its time. The 1.2 TSI engine goes to the top of the class for economy, refinement and performance for a start. The three-door car is spacious inside, while the styling is grown-up and the ride and handling balance is lovely. Add in VW’s fine residual values, build quality and image, and you have an extremely classy supermini.

Cheaper, sportier and better looking... That’s what’s on offer from a three-door supermini. Take Ford’s Fiesta, for example. While the five-door is a fine looker, it’s the three-door that really turns heads.

Up until now, though, you’d have been better buying a walking stick than rely on a three-door VW Polo to boost your image! Can the new version do anything to change that?

VW claims that subtle tweaks to the bodywork give the three-door a more aggressive stance. It’s luxurious too, with four trims – S, SE, Moda and SEL. And the three-door is expected to cost about £600 less than the five.

It uses the same engine range as the five-door, including the 1.6 TDI diesel, 1.2-litre three-cylinder and ageing 1.4-litre four-cylinder petrols. From next year we’ll also get a BlueMotion model with a 1.2-litre, three-cylinder diesel giving 88g/km, plus a GTI with VW’s 170bhp 1.4 TSI twincharger unit.

After the buzzy 1.4, the 1.2 TSI feels lively and revvy. It pulls strongly from low revs, but is smoother and more refined.

The six-speed gearbox is slick, but the seven-speed DSG twin-clutch transmission is definitely worth going for. Handling is crisp, if not as sharp as the Fiesta’s.

The electrically assisted steering reduces its effort with road speed and provides decent feedback. The ride is good, too, although road noise is obvious on concrete surfaces.

Even so, we came away from our encounter impressed. The Polo’s blend of refinement, driver involvement and practicality mean it really is a shrunken Golf.

Rival: Ford Fiesta The Fiesta rains on the Polo’s parade in terms of sharp looks, price and handling. However, only the 1.6 keeps pace with the 1.2 TSI, and you’ve got to go down to a 1.25-litre to match its economy.