Can baby hot hatch live up to famous name? 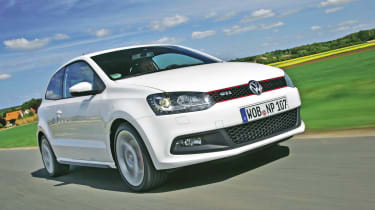 VW has at last produced a Polo hot hatch that lives up to the GTI badge. This latest model packs the same subtly eye-catching looks, involving handling and easy-to-access performance as its larger Golf GTI brother. And as with that car, it’s equally at home on a challenging B-road as it is cruising on the motorway. Factor in a well built and spacious cabin, and surprisingly low running costs, and the Polo GTI truly is a dual-character machine. But at around £18,000, it should be.

With a great badge comes great responsibility. Over the years, hot Polos haven’t quite excited UK buyers, never really living up to the promise of the GTI name – certainly not in the way that the flagship Golf has.

But this new Polo GTI aims to change all that. And Auto Express has got behind the wheel to deliver its verdict.

It certainly has all the right visual cues – just check out those telephone dial-style alloys and the subtle bodykit, with a contrasting red grille surround.

However, it’s the hi-tech equipment under the bonnet that should make the hottest Polo ever a real contender.

Taking pride of place in its arsenal is a 178bhp 1.4-litre TSI supercharged and turbocharged engine, which is hooked up to VW’s seven-speed twin-clutch gearbox. Combined with a kerbweight of only 1,184kg, it promises to offer both performance and efficiency.

And it doesn’t disappoint. The unit delivers 250Nm of torque from only 2,000rpm, so there’s plenty of urge at low revs, while the transition from supercharged thrust to high-rev turbo punch is very smooth. The sprint from 0-62mph takes an impressive 6.9 seconds, and it’s easy to access that performance, thanks to the seven-speed DSG box. Neat steering wheel-mounted paddles allow you to shift ratios smoothly and quickly, while downchanges are accompanied by an automated blip of the throttle to add to the drama.

Yet in a way, it’s almost too efficient – a conventional manual gearbox would heighten the feeling of interactivity.

There’s a nice surprise when you come to fill up at the pumps, though, with combined fuel consumption of 47mpg. CO2 emissions of 139g/km mean owners pay £110 for a year’s tax, too.

When the road gets twisty, VW’s clever XDS traction control system comes into its own. It electronically mimics a limited-slip differential to brake the wheel with the least grip and enables the Polo GTI to corner safely and without loss of traction.

What’s more, the steering is well weighted and offers good feedback. Body roll is also virtually non-existent, thanks to firmer springs and dampers.

However, this isn’t at the expense of ride comfort, and the GTI soaks up imperfections in the road with ease. That means the Polo can transform into a comfortable motorway cruiser at higher speeds and, coupled with decent refinement, it really offers a big-car feel.

This is also partly down to the classy cabin, which is packed with soft-touch materials, solid switchgear and neat touches – such as tartan sports seats and a flat-bottomed steering wheel.

It all adds up to a true baby GTI.

Rival: SEAT Ibiza Cupra With the same engine and gearbox, the Cupra offers a similar driving experience. It’s not as involving as the Polo, although the big advantage the SEAT has is its price – which undercuts the GTI by £1,500.