Like the sweets, supermini's price has jumped over the years. Is it worth it? 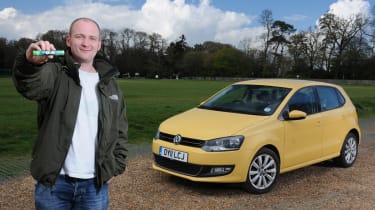 6
When I was a lad, a packet of Polos cost just 10p, making it the perfect treat for a cash-strapped school boy. Yet these days you’ll have to fork out 50p for exactly the same tube of sweets. That’s a massive 400 per cent price increase. And the refreshing mint with a hole isn’t the only Polo that’s got a lot more expensive over the years.
A quarter of a century ago, when I was still in short trousers, a top-of-the-range VW Polo would set you back just £6,122. Today, our Polo 1.2 TSI weighs in at a hefty £15,925. Not only is that £9,803 more than its predecessor, it’s also a fair chunk more than today’s rivals, such as the Ford Fiesta and Kia Rio. So is the VW supermini worth the extra?
Well, after 12 months and more than 12,000 miles behind the wheel, the answer is an almost resounding yes. While it doesn’t have the instant and razor-sharp driver appeal of the Fiesta, or the long kit list of the Rio, the Polo’s slow-burning charms win you over.

For instance, it really does feel a cut above on quality: when you slide into the beautifully crafted interior, it’s as if you’re in something bigger and much more expensive. From the rubberised air vent controls to the soft leather covering the steering wheel, the Polo is packed with classy touches that give it a special feel.
What’s more, the excellent refinement, slick controls, great driving position and absorbent ride ensure it’s relaxing to drive both in town or on the open road.
And while we’d expect VW to have included more equipment as standard at this price, all the essentials are present and correct, including air-con, an iPod connection and four electric windows.
There’s also no faulting the car’s family friendly practicality. Carting about my 23-month-old daughter requires all manner of bags and buggies, yet the Polo swallows the lot without complaint. The well shaped 280-litre boot, useful under-seat trays, large glovebox and huge door bins have helped the car do a fine impression of a mini-MPV.
Yet what has stood out above all this has been the turbocharged 1.2-litre petrol engine. Its smooth and lusty delivery transforms the Polo from class also-ran to star pupil, and helps reinforce the big car feel.
Fortunately, it behaves like a small car when it comes to running costs. Fuel consumption has barely dipped below 40mpg, while variable servicing means the VW has not had visited a dealer. Yes, £15,925 is a lot to pay for a supermini, but our Polo feels as though it’s worth every penny. I’m not sure I can say the same about a 50p packet of mints.

“Eager acceleration and compact dimensions make the Polo fun to drive. Yet it would be even better if the steering and gearshift were as precise as those in my Mazda 5.”Julie Sinclair, Consumer editor

“I’m a fan of the TSI engines, especially the 1.2. Yet its fuel economy isn’t really on a par with a diesel. It’s good, but no match for the 1.2 and 1.6-litre TDIs.”hibitdat, via www.autoexpress.co.uk