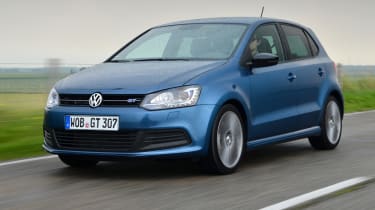 Like stop-start, cylinder deactivation will soon become the norm on all cars. But for now it makes this sporty Polo a stand-out offering. Its 1.4 turbo is a great engine that combines strong pace with incredible efficiency. Add a stylish look inside and out, plus the quality we’ve come to expect from VW, and the Polo Blue GT ticks a lot of boxes.

It’s the sporty hatch with a conscience. The new VW Polo Blue GT aims to offer a spirited driving experience with low emissions and running costs that won’t break the bank – but has the pursuit of economy come at the expense of fun? Marking the next step in the BlueMotion range, the Blue GT sits below the Polo GTI and features a 138bhp 1.4-litre turbo four-cylinder engine. The clever bit is that it features cylinder deactivation, which shuts off two cylinders under light throttle loads to save fuel.

We’ve already seen this engine in the Audi A1, and the headline figures in the Blue GT are very impressive. As well as a 0-62mph time of 7.9 seconds and a top speed of 130mph, the Polo claims economy of up to 62.8mpg and CO2 emissions of just 105g/km. That means road tax costs just £20 a year.

It also stands out on the road with a neat bodykit that borrows its front and rear bumpers, diffuser and roof spoiler from the Polo GTI, and mixes those with side sills from the Polo BlueMotion. A gloss black grille and door mirrors, 17-inch alloys and a ride height 15mm lower than the standard car complete the look.

Inside, there’s more inspiration from the Polo GTI, with instruments and a black roof lining from the hot hatch, along with bespoke GT sports seats and a leather flat-bottomed steering wheel.

The question is, does the Blue GT feel sporty to drive? This is a car with a dual character. Under a light throttle, and with the engine operating between 1,400rpm and 4,000rpm, it’s effectively running on just the first and the fourth cylinders. The switchover takes as little as 13 milliseconds, and other than a display on the dashboard, you barely notice the deactivation taking place. Listen really carefully and you can hear the faintest change in note on a light throttle, but that’s about it. Flatten the throttle, and the engine offers lots of punch. Acceleration is rapid, and with 250Nm of torque from just 1,500rpm, it’s very flexible. A  six-speed manual gearbox is available, but we tried the seven-speed DSG twin-clutch gearbox. With a long top gear and a well spaced spread of ratios, plus  slick changes in manual and automatic modes, it makes the most of the power available.

VW claims that the cylinder deactivation system covers 70 per cent of driving conditions under the EU driving cycle, so it’s working a lot of the time, and on our mixed test route we achieved well over 50mpg, which is about what you’d expect from a diesel. On a motorway cruise we saw over 70mpg, too. So is it all good news? Well, in corners the Blue GT doesn’t sparkle in the same way a Ford Fiesta Zetec S does. The steering is precise, there’s very little body roll and decent levels of grip, but at the same time it’s not very involving. It’s hugely competent and easy to drive fast, just not much fun. Another negative is the price. VW estimates the range will kick off at £17,500 for a three-door manual car, which means this five-door DSG model will cost around £19,000. That’s about the same as a Polo GTI.

However, the idea of a warm hatchback which is sporty to look at, good to drive and as efficient as most diesels is very appealing indeed.