Volkswagen has revealed the first official image of the updated Tiguan. Set to be released this Summer, the Peugeot 3008 rival will gain revised styling, more efficient engines and the latest infotainment tech.

The design sketch shows that the facelift will introduce a completely overhauled front end look. The lights will become slimmer and extend into the front wings as they do on the latest Golf, and the lights will feature LED technology - with advanced matrix tech on top spec versions. Below the new lights and grille will be a tweaked bumper design. Even the bonnet will be a new panel.

While official images of the rear are yet to be revealed, earlier spy shots of prototypes have shown LED lighting tech at the back, too - a feature that VW insiders have now confirmed will be standard across the range.

Inside, the Tiguan is set to benefit from VW's latest infotainment technology used by the new Golf and updated Passat. That means a digital instrument panel will be offered, and the central touchscreen will measure up to 10 inches. Other features, such as ambient lighting and wireless app connectivity for Apple CarPlay and Android Auto have also been confirmed. 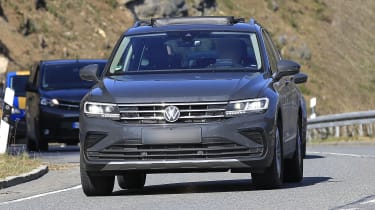 Volkswagen recently confirmed that the Tiguan would receive a PHEV powertrain by the end of 2020. Exact specifications for the system are yet to be announced, but it is almost certain to share its powertrain with the upcoming Golf GTE, Passat GTE and Arteon GTE. In other words, a 1.4-litre four-cylinder petrol engine will be paired with a compact electric motor and a 13kWh lithium-ion battery pack, producing a combined output of 242bhp and 400Nm of torque.

The other engines in the range are set to be taken from the new Golf, all offering reduced emissions relative to their predecessors. The diesels will receive a ‘twin dosing’ technology: essentially a second catalytic converter, the system is said to reduce emissions of Nitrogen Oxides by 80 per cent.

We’ve previously spotted a hot Tiguan undergoing pre-production testing, and while VW’s Head of Product Marketing, Dr. Hendrik Muth, stopped short of explicitly confirming a new R model, he did confirm that Volkswagen is “going to do something on the performance side.”

The longer version of the Tiguan, the Allspace, is also set to receive similar updates. VW bosses confirmed that it will follow the current life cycle of the existing Tiguan range, which means that the revised model will make its debut a little under a year after the standard model.

The Tiguan is now a crucial model for Volkswagen. In 2019, over 910,000 Tiguans, both regular and Allspace, were produced - more than any other Volkswagen model.

What does the plug-in hybrid Tiguan have to beat? Read our run-down of the best hybrid SUVs on sale in the UK now… 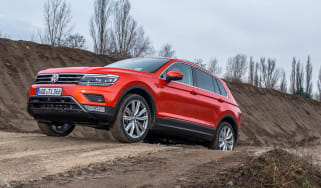 The VW Tiguan is pricier than some rivals, but it delivers a desirable package of practicality, technology and quality
New 2022 Volkswagen Tiguan set for radical new look

The new Mk3 Volkswagen Tiguan to lose its boxy shape in favour of a coupe-like look, previewed by our excusive images