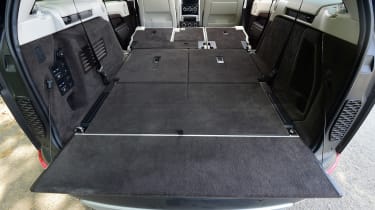 The VW Touareg lacks the prestige of some premium-badged rivals - instead, its strengths lie in its comfort, cabin space and relative affordability. This mid-life refresh is mild and, although it does add a certain amount of appeal, VW will be hard-pressed to convince customers that this revised SUV is a worthy alternative to Hyundai’s significantly cheaper Santa Fe.

The VW Touareg is in some ways the forgotten car of the large SUV sector. But Volkswagen hasn’t ignored its flagship 4x4 – to keep it in the sights of big off-roader buyers, it’s treated the car to a host of updates.

A simplified range sees the Hybrid and V8 TDI versions dropped from the UK, and engine choice limited to a 3.0-litre V6 TDI with either 201 or 258bhp. As before, there are SE, R-Line or off-road themed Escape trims. Visually, you’d do well to spot the changes, which are limited to new bumpers, a reworked grille and the introduction of xenon lights as standard across the range.

Bigger news is the improvement in efficiency. Engine modifications and the introduction of a coasting function on the eight-speed automatic gearbox mean the 201bhp version now emits 173g/km – 11g/km less than before – dropping it two Benefit in Kind tax bands for company car drivers. That’s crucial given that around 77 per cent of Touaregs are bought by fleet customers. The 258bhp version we drove emits just 1g/km more and claims an identical 42.8mpg economy. 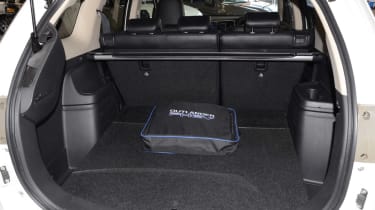 With 580Nm on tap, there’s decent lowdown torque, which combined with the smooth shifting auto ensures the Touareg has plenty of mid-range performance. Engine refinement is a strong point - it helps that you don’t need to extend the diesel - although you can feel a little resonance through the steering column at idle and low revs.

Dynamically, the Touareg is unchanged. There’s plenty of grip and it’s stable at speed, but it always feels like a very big vehicle. While SUVs such as the Range Rover Sport and Porsche Cayenne shrug off their weight and size to feel surprisingly nimble, the Touareg is best driven leisurely.

Yet, sitting on large 20-inch wheels, the sporty-looking R-Line model accounts for 85 per cent of sales in the UK. However, only SE models were available at launch, and with smaller 19-inch wheels they ride well enough.

The new Touareg hasn’t changed a great deal, but it’s a solid family choice. The problem is that the most expensive Hyundai Santa Fe you can buy costs around £10,000 less and comes with seven seats.