A low price and strong resale values make the up! GTI a purchase for your head and your heart 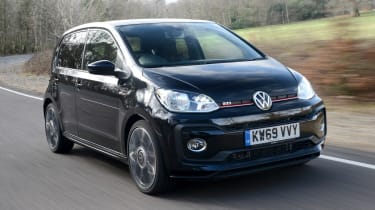 A three-door up! GTI costs around £15,700, but there’s a £400 premium if you fancy the more practical five-door version. This makes the GTI around £2,000 more expensive than the R-Line model and £4,000 dearer than the basic version.

Aside from the electric e-up!, the up! GTI is actually the most efficient up! you can buy. Turbocharging helps the 1.0-litre engine to deliver an impressive 53.3mpg on a combined cycle, which is around 3mpg more than the non-turbocharged version.

You’ll be having too much fun to achieve such great fuel economy in the real world, but CO2 emissions of 110g/km provide a first-year tax rate of £155, dropping to £150 in the second and subsequent years. 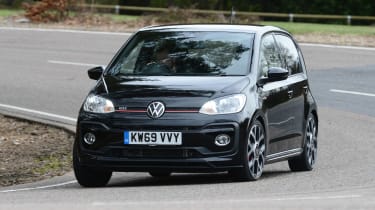 Most versions of the Volkswagen up! slot into insurance groups 2 and 3, which makes them incredibly cheap to insure. But a group 17 rating makes the up! GTI will be more expensive, which could rule it out for young drivers.

The VW up! GTI remains in high demand, so used values are very strong. It’s expected to retain 46% of its value over three years, while the Suzuki Swift Sport can only manage 41%.