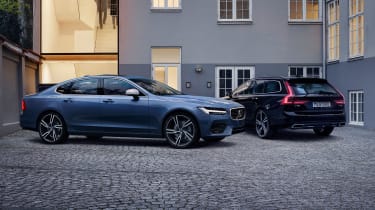 Volvo has revealed a new R-Design trim for the S90 saloon and V90 estate, featuring new sporty design tweaks inside and out. The new range-topping trim will compete with BMW’s M Sport and Mercedes’ AMG Line models.

The most obvious changes include the newly designed front end and piano black grille. There are some new fog lights integrated into the sportier bumper, while five-spoke matte black diamond-cut alloys are also be unique to this variant. 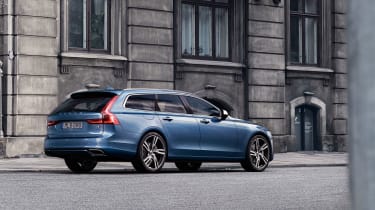 The performance-oriented theme extends into the interior, where drivers will be welcomed by contoured sports seats, a new sports steering wheel and and a carbon-fibre look trim. Smaller touches such as sports pedals, mats, and a new ambient lighting system will also be included as standard on R-Design models.

All R-Design models will feature the same engines and transmission as the existing S90 and V90 Momentum and Inscription trims. In the UK, that will mean a choice of two diesel models: the D4 with 187bhp and the pricier D5 with 232bhp, while an eight-speed automatic gearbox standard on both. The T5 and T6 petrol engines will not be available in the UK, though a T8 Twin-Engine Hybrid is expected to join the range later. 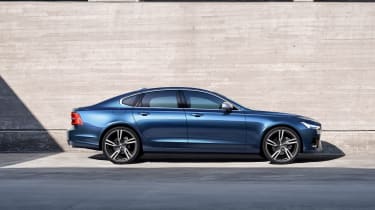 The S90 and V90 R-Design will be priced above the current flagship Inscription variants. We expect prices to start at around £38,000 for a D4 R-Design, with the V90 estate carrying a £2,000 premium. Despite the lack of official pricing, Volvo says both cars are available to order now.

What do you think of the new R-Design models? Leave us a comment below!