We put the new Volvo S90 executive saloon through its paces, but should BMW, Audi and Mercedes be worried? 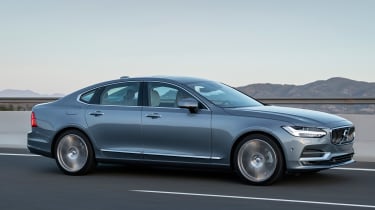 Volvo is right to deny UK buyers the T6, because a four-cylinder turbocharged petrol executive saloon of this size would sell in tiny numbers. However, there’s plenty of promise in the S90 package as a whole, and we’re not about to revise the view, gleaned from that winter drive a few months back, that you should give Volvo’s new flagship saloon serious consideration if you’re in the market for a 5 Series, A6 or E-Class.

Volvo is going from strength to strength at the moment. The XC90 is still enjoying strong sales even over a year into its lifespan, and there's even the prospect of a new baby XC40 SUV arriving before the end of 2017. Before then, though, it's time for the Swedish brand to reinvent its big saloon and estate car lineup by replacing the aged V70 and S80 - and now we've had our first chance to try the Volvo S90 on tarmac after a winter drive on snow earlier this year.

The S90 replaces the old S80, but it’s a world away from that outdated offering. It gets Volvo’s latest Scalable Platform Architecture chassis (SPA) - which is, in effect, the same set of underpinnings as the XC90. This switch means the S90 can share all of the big SUV’s safety tech, as well as building upon its cabin quality.

The S90 is available with a pair of diesel engines at launch in the UK, though neither was available for evaluation at Volvo’s Spanish launch venue. The two 2.0-litre four-cylinder motors are badged D4 and D5. The 187bhp D4 editions come with front-wheel drive and can reach 62mph from rest in 8.2 seconds, while emitting 116g/km of CO2. 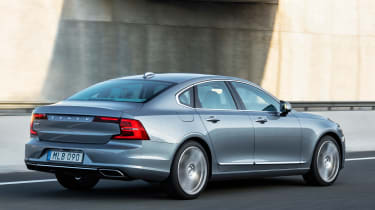 The more powerful D5 offers 232bhp and 450Nm, and features an electric compressor called PowerPulse that’s designed to reduce turbo lag. The D5’s performance figures are more impressive, with 0-62mph taking just 7.3 seconds, but the engine is available only with four-wheel drive, so fuel efficiency takes a hit. CO2 emissions jump to 127g/km, in fact, so the BIK rate moves up two points from 23 per cent to 25 per cent.

The standard gearbox across the range is an eight-speed auto, incidentally; Volvo says it has no immediate plans to offer a manual gearbox in the UK.

There are also a couple of turbocharged petrol engines that aren’t likely to be offered in the UK - the T5, which has 251bhp and front-wheel drive, and the four-wheel-drive T6 (tested here), which adds supercharging for 315bhp.

The sole petrol option in the UK is likely to be the T8, which is actually a plug-in hybrid with 402bhp and CO2 emissions of just 44g/km. Volvo has yet to confirm pricing for this edition, though. 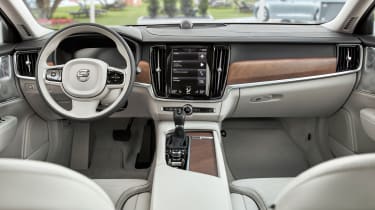 Volvo is pitching the S90 just slightly north of the BMW 5 Series, so the more modest of the two trim levels, Momentum, is priced in the same bracket as the German car’s SE editions. The S90’s kit list looks more generous, though, with leather upholstery, dual-zone climate control and LED headlights as standard. It also gets Volvo’s Sensus infotainment set-up, housed in the same nine-inch portrait-layout touch screen as in the XC90.

The S90 T6 acquitted itself pretty well on the roads of Volvo’s Spanish launch venue, with a few caveats. In the most part, the chassis set-up is set on the comfortable, relaxing side of capable - which, you could argue, is precisely where a Volvo should be. It doesn’t try to feel as agile as a BMW 5 Series or a Jaguar XF; instead, it focuses on being a refined cruiser, and while that does mean a bit of extra body lean in corners, it’s composed enough for all but the most enthusiastic of drivers. We’d watch the optional larger wheels, though, which may make the ride a bit brittle on UK roads. The standard 17s and 18s would be our choice.

The S90 features Volvo’s latest semi-autonomous technology, called Pilot Assist. While this system was restricted to around 20mph in the XC90, its scope moves up rapidly in the new version, to around 80mph. You’ll still need to have your hands on the wheel, but Pilot Assist can keep your car in the right lane and watch for hazards - and it makes a scarily good fist of it all. Volvo is keen to stress that the system is only semi-autonomy - but we can already see how it would take a great deal of strain out of most commutes.

The main niggle in the S90 T6, sadly, is the engine - which did a good job on the test route of vindicating Volvo’s decision to not offer it to UK buyers. The T6 certainly packs a decent amount of shove, but it still needs to be worked a little harder than the D5 diesel did in the even heavier V90 over the same roads.

What’s more, while the T6 is calm enough once you’re up to speed, it sounds pretty thrashy if you do decide you want to get somewhere in a hurry. And whatever Volvo may claim, the four-cylinder petrol note just doesn’t sounds as suitable for this size of executive saloon as a six-cylinder motor.

The broader picture on the S90 is more positive, though - and nowhere more so than in the cabin. It’s a real delight, with excellent, tasteful use of natural materials like fine leathers and real wood, and a clean, uncluttered fascia design that makes great use of the portrait-layout screen. There’s room for a couple of six-footers in the back seats, too - even when similarly sized folk are already up front.