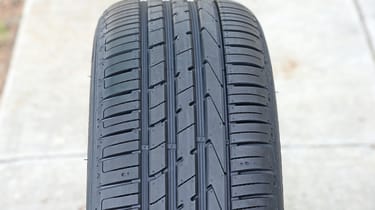 Hankook is another firm to produce a tyre just for SUVs, but you have to ask quite how much is a fresh design and how much marketing, because non-specific rivals will have been developed for the same weight ratings and other aspects.

As it is, the Ventus S1 is a close match for the plain old PremiumContact 6. Deep water is the S1’s forte, because it took a first and second in the aquaplaning tests. And the deeper the better: in the 8mm on the straight test it hit 58mph before slip topped 15 per cent – around 4mph better than the worst tyre. It was also close to the Goodyear in the curved assessment.

As the water depth reduced, so did the Hankook’s effectiveness. Across the wet tests it was third, thanks to close to the best results in handling and braking. It could have been sharper on the wet circuit, but it was near the pace and worked well in the faster sections. It was less assured in the tighter stuff, where it struggled for traction on some exits.

The total lack of water in the dry tests saw the slide in competitiveness continue and the Hankook was a pretty distant last. It felt like it, too, with a general lack of grip. Corners others could take flat out needed a lift of throttle with this, so we had to apply more lock to get through turns at the same speed. Where it did score well in the dry was for cabin noise, winning a close test.

"Not as popular as some other tyres in the test. But, it has overall positive reviews from customers, with reliable braking and quiet ride being praised"