Promising test debut, with good performance in the wet, but less good at the pumps 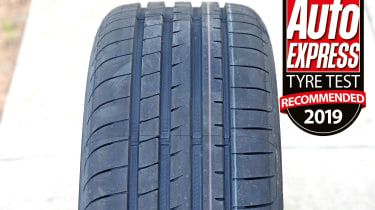 All new tyres are important for the producer, but the Asymmetric 5, launched earlier this year, comes at a key time for Goodyear.

After years letting sister brand Dunlop take the sporting limelight, Goodyear is attempting to revive its own reputation at the faster end of the market. This is our first full look at the Asymmetric and its promise looks to have been fulfilled. We couldn’t separate it from the Dunlop overall, and the gaps were small in the tests, too.

The Goodyear had the edge in its traditional area of expertise – the wet. It starred in the aquaplaning tests, and in the shallower-water handling and braking tests. It felt assured behind the wheel, too, with good traction and a positive turn-in.

In the dry the Asymmetric 5 was less effective, although the margins were small compared to the leaders. It faded when we lapped the dry handling circuit; as the temperatures rose the tyre felt softer and the lap times suffered. In the Dry braking test, it finished less than a metre behind the winning Falken.

It also dealt well with our selection of surfaces in the cabin noise test. Less impressive was the fuel consumption, which we’d hoped would be better on a new design, although most of its rivals performed much the same.

"Despite this being quite new, buyers have responded positively, with a rating of 4.7/5. Their comments focus on good grip, but noise levels are a negative"