Secure and safe, although rivals have the edge over this tyre in most tests. 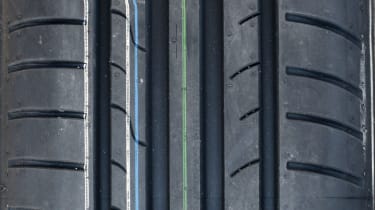 Secure and safe, although rivals have the edge over this tyre in most tests.

Another sixth place for the Winter Sport 4D. It scored well in the dry, plus for cabin noise and economy – although it couldn’t quite match the ContiWinterContact and Ultragrip for the latter, it showed yet again that Goodyear/Dunlop’s engineers have found a trick when it comes to rolling resistance. This tyre was clearly ahead of the rest of the closely matched pack.

It was second in dry braking and seventh for dry handling – around a second behind the winner. And while it was second to the Pirelli on cabin noise, it felt well damped and smooth.

Elsewhere, the tyre hovered around sixth. On snowit was a couple of per cent behind the best. It felt secure on the handling track, with less rear movement than most, but struggled to get the power down out of tighter turns. In the wet it lacked bite, washing wide as more lock was applied – safe and progressive, but lacking pace. It also needed more than two metres longer to stop than the winning Continental. The aquaplaning tests’ deeper water caused it more problems, especially in the curve.