An excellent debut in our test, with good performance on snow and wet roads. 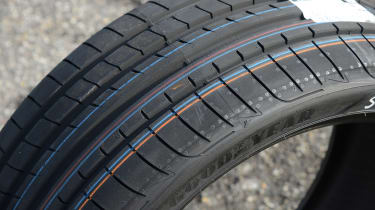 An excellent debut in our test, with good performance on snow and wet roads.

Another third place for Goodyear, this time with its new UltraGrip 9 seeing off the challenge from fellow newcomer Uniroyal and just failing to pip last year’s winner from Nokian.

This tyre replaces the UltraGrip 8, which had been around since 2011, and promises improved fuel economy and grip on snow. Our tests back up the claims, with rolling resistance close to the winning Continental.

In terms of performance in the snow, the Goodyear had the edge over the ContWinterContact and closely matched the Uniroyal. It felt good on the handling course, with a strong front end that helped the car carry speed into turns. The result was second place, just tenths of a second behind the all-conquering Nokian.

The UltraGrip 9 was less successful in the wet, although it did better in the curved aquaplaning test than many. It felt really hooked up on the handling track, again inspiring confidence with its strong front grip. It had the edge over close rival Nokian in the wet and in the dry section, as well as on economy, cabin noise and price.

It trailed the Finnish tyre on braking, though, taking nearly three metres longer to stop. The Goodyear was closer to the front in the tightly packed dry handling test; it felt softer than rivals and lacked sharpness, but hung on well.