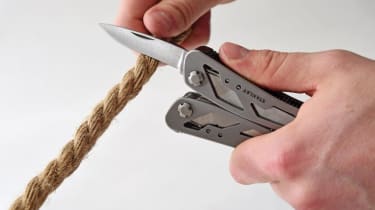 A multitool is a great addition to any glovebox. It cuts, grips, turns screws and can prove invaluable to motorists during a car breakdown, when it could help to get you back in the road.

A multitool’s benefit won’t end on the roadside, either, because it will also prove useful for small jobs around the house or in the workshop. A good multitool will quickly become a handy companion during camping trips, cycle rides and any other outdoor activities you pursue as well.

But with most manufacturers offering the same selection of tools on their products and advertising the same capabilities, picking the right multitool is difficult.

So we’ve lined up eight products from various makers that offer similar features, but are available at a wide range of price points, putting them through their paces in a test to help you choose the right one.

We looked for high-quality tools that were easy to hold and work with. Pliers that could be used single- handed scored well. Knives and saws faced cutting tests to rate sharpness and ease of operation.

Tools that locked in place scored extra points, because this is a crucial safety feature. We also assessed the screwdrivers on each tool, while price was the final factor that we considered.

The Gerber Center-Drive wins by mixing top-quality tools with a clever design. Also on the podium were the handy Leatherman and Victorinox. 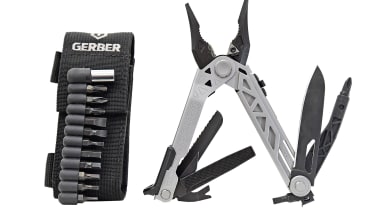 The Gerber topped many of our tests, thanks to its unique layout and high-quality tools. Unlike others here, its pliers don’t fold out, but are pushed out. The sleek profile, combined with spring-loaded plier jaws, makes the Center-Drive easy to use single-handed. Another highlight is the 9cm blade; it topped our cutting tests and, like other top performers, sits at the bottom of the tool when folded out. What really impressed us was how well engineered the screwdriver is. Its 8cm shaft is the longest here and locks into place, as with its other tools. Not cheap, but worth every penny. 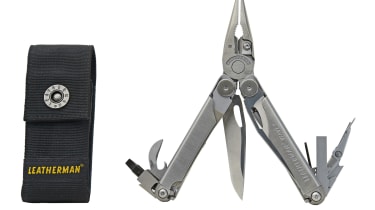 The Wave+ has a sleek profile that makes it easy to use with one hand. Its pliers are not spring-loaded,  though, so it was slightly harder to work with at times. There’s an excellent 8cm blade that is extremely sharp. It excelled in our cutting tests and, thanks to the compact size, it was easy to operate. Its petite proportions also made it easy to use as a screwdriver, but we would have preferred a slightly longer shaft for the driver. However, we liked the fact that the Wave+ comes with a double-toothed saw, because this made cutting piping a lot quicker, while another highlight was the small pair of scissors. 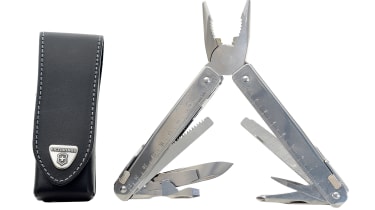 Swiss brand Victorinox has another high-quality product here. At 290g, the SwissTool was the heaviest on test, but the weight comes from a selection of high-quality tools and clever engineering. The Phillips-head screwdriver is slightly slanted, so it sits at the centre of the tool when folded out, making it more balanced to use. As with the Leatherman, the SwissTool’s sides double as rulers. The large profile and lack of spring-loaded jaws made it slightly more cumbersome to use single-handed. We liked the 8cm blade because it’s really sharp and, as with the other 12 tools, it locks easily into place. The double-toothed saw topped our cutting tests. 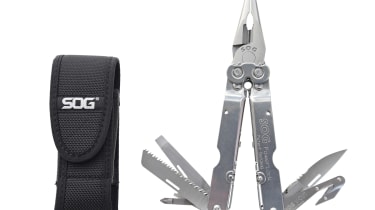 A few interesting features mark out the PowerLock V-Cutter. The first is the patent-pending V-Cutter tool that’s good for slicing small wires and string. The rest of the package impresses, too. Although its pliers are not spring- loaded, the sleek profile makes it easy to use single-handed. Its sides double as rulers and we liked how well the 7cm knife cuts. There’s also a sharp, double-toothed saw that easily cut through plastic piping. We liked the fact that all of the high-quality tools lock into place. The screwdriver was easy to use, although rivals such as Victorinox and Gerber have better bits. 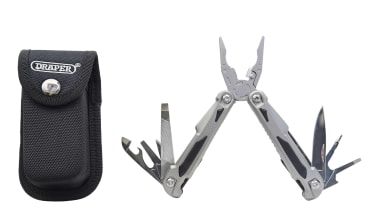 The Draper beats many of our top performers on price, but still functions and feels like a top-quality item. We liked how easy it was to use single-handed, thanks to the spring-loaded jaws and a straight profile that sits well in your hand. All of the tools lock into place and there’s an easy release mechanism to unlock them back. The 7cm blade was a little behind our top performers when cutting and carving, but it still feels like a decent unit. We liked the Phillips and flat-head screwdrivers because they had a longer shaft than other budget tools here. But we’d have preferred a double-toothed saw instead of the single version. 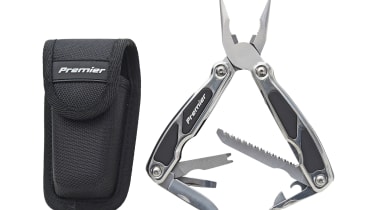 Another multitool to consider if you are on a budget, because you get a good piece of kit with individually locking tools. The plier jaws are spring-loaded, and the small profile of the unit means it sits well on your palm and is easy to use in tight spaces. The screwdrivers could have been more user-friendly, because they didn’t quite match the performance of the top products here, while the small, 5cm blade struggled in some of our cutting tests. But the Sealey impressed us with its sharp, double-toothed saw, and the PK36 also had the largest pair of scissors in this test. 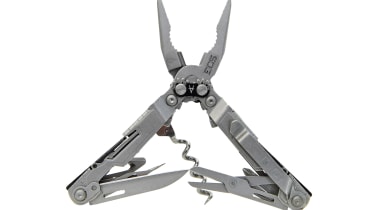 This is the smallest tool we tested and, at 128g, also the lightest. But SOG does a great job of proving that a compact size doesn’t entail a compromise on quality or capability. The PowerLitre’s 6cm blade proved sharp and better at cutting through piping than some of its larger rivals. Although the jaws aren’t spring-loaded, the PowerLitre’s small size makes it very easy to use single-handed. A pair of scissors is also included. While it didn’t affect the test score, it’s worth noting that the PowerLitre is the only tool here not to come with a pouch for storing and attaching to your belt. 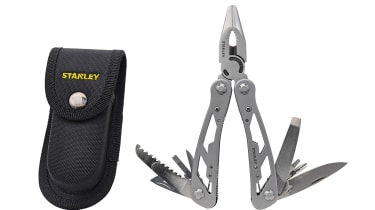 The Stanley 12-in-1 is the cheapest unit on test. It comes with all the essential tools you may need, but we would have liked them to lock in place to help prevent injuries. The plier jaws are not spring-loaded, and the convex shape of the tool makes the 12-in-1 slightly awkward to use single-handed. In our cutting tests the 6.5cm blade struggled, although we did like the fact that the saw was double-toothed, which helped it cut through piping faster. The screwdriver was another unit that fell behind the quality and capability of its rivals.