The gloves are off in the premium hatch sector. Alfa Romeo has now revised the 147 to join the bitter fight for sales. 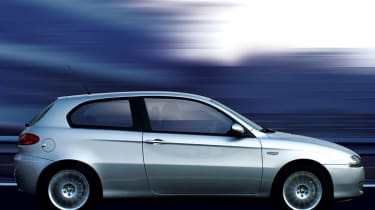 The 147 remains an attractive package, especially with the introduction of a more powerful 1.9-litre Multijet diesel engine option. While the Alfa is not as great an all-rounder as some of its German rivals, buyers looking for something a little different will continue to relish its individuality.

The gloves are off in the premium hatch sector. Audi and BMW think they have it sewn up with the A3 and 1-Series respectively, but Alfa Romeo has now revised the 147 to join the bitter fight for sales.

The original 147, launched in 2000, was built on a shortened version of the 156 saloon's platform. Its slick Italian styling and sporting performance saw more than 360,000 examples sold worldwide. Now, the company has high hopes for the facelifted version.

The most obvious changes are on the outside. Alfa's famous grille has been enlarged and lowered, while slimmer headlamps match the curve of the wheelarches. The front spoiler has larger air intakes, and overall the car has a more aggressive appearance, in keeping with the GT coupe.

At the rear, the new 147 looks lower and leaner, thanks to the introduction of taller, slimmer tail-lamps, while a chrome boot strip is included on some models. All of these changes are subtle, but together they help to make the most of what is already a highly distinctive shape. The alterations to the interior are limited to revised black-on-white instrument graphics, as well as the option of a two-tone black facia and new rear headrests, designed to improve visibility.

While the build quality is still not up to the very high standard set by Audi, the materials look and feel good. The big downside, however, is that the Alfa does not offer as much space as more conventional rivals such as the Volkswagen Golf, SEAT Leon and Ford Focus. However, the Alfa's rear-seat room is adequate.

To compete with the influx of diesel engines to the sector, the company has introduced a new 150bhp version of its 1.9-litre JTD Multijet unit. This becomes the most powerful 147 to drink from the black pump.

Due to the combination of 305Nm of torque and a six-speed gearbox, the 147 delivers very strong acceleration, and, unlike many other engines of this capacity, it doesn't struggle at high revs. Refinement is also first rate, and there's no hint of unpleasant diesel clatter, even when starting from cold. Meanwhile, a new option on the revised range is Comfort suspension, which improves the ride quality without compromising the handling or grip. In town, the softer set-up copes well with broken surfaces and potholes, although it still manages to be quite sporty.

However, it's on challenging roads that the new damping becomes more apparent. The car still delivers excellent grip but, through sharp bends, it displays real body control.

It loses little by way of traction or handling ability over more stiffly sprung 147s, yet gives a supple and comfortable ride for passengers. The revised set-up inevitably leads to a touch more body roll, but the trade-off is worth having, as - even with the Comfort suspension - the 147 is rewarding for enthusiastic drivers. The steering is well weighted and responds quickly through curves, even if it lacks some feel in the dead-ahead position.

Other changes to the 147 include the option of an Easyspeed gearbox. The system is mechanically identical to Alfa's Selespeed, but does without steering-wheel-mounted shift buttons. Instead, it has a conventional gearlever through which the driver can select semi or fully automatic operation.

Initially this is offered on the 2.0-litre Twin Spark petrol 147, but it will be introduced on diesel models later. A four-wheel-drive variant, sharing the drivetrain of the forthcoming 157, is also scheduled to arrive next year.