When it comes to design flair, there are few cars in the compact hatchback market which rival the appeal of the Alfa Romeo 147. Flawed it may be, but the lithe Italian has always managed to win fans by placing style over substance. 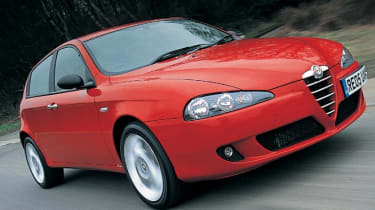 Subtle revisions have improved the Alfa 147's looks, cabin and on-road abilities, while the 1.9-litre JTD Multijet engine is now the pick of the line-up. And although the manufacturer has not been able to better the all-round ability of some rivals' cars, buyers who are keen on expressing individuality will enjoy the 147's unique appeal.

When it comes to design flair, there are few cars in the compact hatchback market which rival the appeal of the Alfa Romeo 147. Flawed it may be, but the lithe Italian has always managed to win fans by placing style over substance.

And now, with the addition of a new diesel engine at the top of the range, the model has strengthened its case. It is been facelifted, too, and benefits from the same look as the company's larger 156 saloon and GT coup�.

The most obvious changes are at the front. Clear-lens projector headlights now stretch further across the bonnet, while a deeper Alfa grille gives a more distinctive appearance. A revised front bumper features larger air intakes with discreet foglamps, while at the rear, the redesigned tailgate gets deeper lamps, plus chrome edging on the lower lip.

Climb inside, and there is another series of detail updates. All the main instruments are now housed in a single binnacle, and feature smart graphics which are much easier to read.

The modifications continue with the introduction of the same high-quality materials seen in the GT. An expanded choice of cloth and leather colours is available. The revised 147's build quality is not first rate, but there is no denying the appeal of its fresh appearance.

However, the most important change comes under the bonnet. In addition to the existing 1.9-litre JTD engine, Alfa is now offering a 150bhp Multijet diesel. This features a modified injection system to provide more performance, and with 140bhp and 305Nm of torque available from as low as 2,000rpm, the new oil-burner is very flexible, delivering rapid acceleration with ease.

Combined with the six-speed manual gearbox included as standard, the new powerplant makes the 147 a fine cruiser, as well as a convincing sporty hatch. The engine revs easily to the red line, yet economy does not suffer as a result - the Multijet 147 is capable of returning a combined figure of 47.9mpg.

To match the excellent performance, suspension settings have been uprated, and the car now provides a better blend of ride and handling. Revised damping has taken the sting out of potholed surfaces, although the Alfa grips the tarmac well when pressing on, making it entertaining to drive.

While the ride is still on the firm side of comfortable, it avoids being crashy - although the 147 falls short of delivering the superb balance of a Ford Focus.