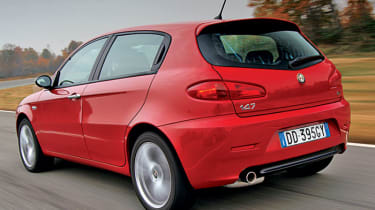 Sporty styling revisions and an improved kit list give the 147 Q2 added appeal, but the clever mechanical diff is the headline news – and it works well. Improved traction makes the diesel 147 an accomplished performer, especially in the wet. However, exactly how many customers will be willing to pay the £1,000 premium for improved handling remains to be seen.

Alfa's engineershave given the 147 a boost with some hi-tech handling tweaks for the fastest diesel model.

The Q2 system is a new differential designed to improve front-wheel-drive traction. Auto Express put the technology to the test to see if it gives the old-timer a fresh lease of life.

Before you even climb aboard, you know there’s something special about the 147 Q2. There are smart 17-inch alloys, a discreet rear spoiler, and the grille and mirrors get a satin finish.

The revisions give the pretty hatch a purposeful edge – a feeling maintained inside by the addition of red stitching on the leather seats and aluminium pedals. A Bose stereo, cruise control and electronic stability control are all standard, too. However, you won’t notice the most important revision until you drive away. The new powertrain set-up incorporates a Torsen limited slip diff, and it doesn’t take long to feel the benefits of the Q2 system on Alfa’s twisty test track.

Even exiting tight bends with a clumsy right foot, the powerful oil-burner won’t break traction, and you have to really push before the front tyres start to lose grip.

The direct steering hasn’t lost any feel, and there’s hardly any tugging through the wheel as the diff works its magic. In fact, the system improves grip to such an extent that you really have to work hard to get the traction control light on the dash flashing, although the lowered suspension still permits too much body roll for our liking.

And that’s not the only downside. The Q2 drivetrain will initially only appear on flagship diesel versions of the 147 and GT, before spreading to other models in Alfa’s line-up. All the firm’s engineers need to do now is teach their powerful petrol models the same trick.