Why do enthusiasts get so excited at the thought of an Alfa? The rich motorsport heritage? The gorgeous Italian styling? Sure, both are useful in the fight against German rivals, but the firm's real selling point is its engines 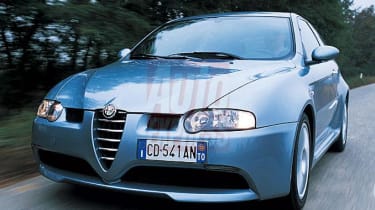 Alfa is doing its utmost to retain its sporting appeal, despite parent firm Fiat's financial difficulties. This is good news for drivers looking for something special, as the 147 GTA injects a racing pedigree into the compact hatch sector. Fast, fruity and with real Latin flair, it is great fun to drive. Shame it's not on sale here until next summer.

Why do enthusiasts get so excited at the thought of an Alfa? The rich motorsport heritage? The gorgeous Italian styling? Sure, both are useful in the fight against German rivals, but the firm's real selling point is its engines. Somehow even the base motors have charisma and fine performance, and its V6 range-toppers are the world's finest.

So when we heard that Alfa was working on a GTA version of its 147 hatch, we wondered how it would find an engine with the right credentials. To take on the likes of Ford's Focus RS, it would need at least 200bhp, and none of the firm's four-pots was up to the task. Surely it wouldn't dare to try to cram in the bigger 156 GTA's 250bhp V6? That would just be ridiculous...

We are still barely able to believe it as we stare under the bonnet of this latest - and greatest - 147. The 3.2-litre 24-valver looks good even when it's not running, with its chrome pipes and red lettering. But the beauty isn't only skin deep - 300Nm of torque from 4,800rpm is a good start, and no other hot hatch can claim such power.

Start it up and the playful burble at tickover soon becomes a tuneful symphony. There are six gears, too, although the short ratios and that lovely sound mean it's all too easy to make the rev limiter cut in frequently. Alfa says the 147 GTA is the fastest car in its class, and with a potential 0-60mph time of 6.1 seconds and top speed of 150mph-plus, it's hard to argue.

To cope with the power, engineers have reworked the dynamics, with upgraded suspension all round. But even the lowered ride height gives none of the bone-jarring ride quality which af-flicts so many hot hatches. There's lots of torque steer, though, while drivers who prefer a competition-style set-up will relish the slightly unsettled rear end and nose-biased braking system. The steering, although not as accurate as the Focus RS's, has good mid-bend adjustment and high-speed feel, which adds to the entertaining dynamics.

To Alfa buyers, the GTA's looks are just as important as the performance. So while the 147 may be the firm's baby, there's nothing underdeveloped about this model's clothing. Huge 17-inch alloys fill the beefier wheelarches, and there are sharper-creased flanks and additional sill skirts, too. Deeper front and rear bumpers are dominated by gaping air vents, while topping off the visual feast is the 147's trademark fang-shaped grille, flanked by additional intakes. Other modifications include clear indicator lenses, twin tailpipes and a choice of 10 body colours.

A little disappointingly, the interior doesn't have quite the same impact on the senses. Luxury leather trim is optional, but the cabin has a dark feel; a little extra colour would have created a more youthful look. Perhaps Alfa felt it was being daring enough with that choice of outrageous engine.