The Alfa is charismatic and fun, but ultimately flawed 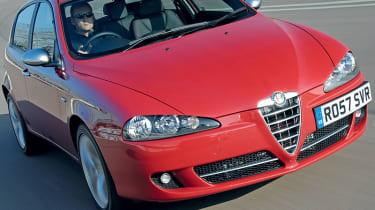 Driving The 147 lives up to its racy looks on the road. The steering is direct and well weighted, while the manual transmission has a precise action and short throw. Only a firm ride lets the overall package down, as the car becomes fidgety when travelling over poor surfaces. An interesting variant is the Q2, which comes with a front limited-slip differential (also available on any other model in the range, as a ound;450 option). This really makes a difference in the corners. Grip is much stronger, and the 147 refuses to spin away power even when you apply plenty of gas. It combines well with the 1.9-litre diesel, which is one of the smoothest oil-burners around, while also giving strong performance. The raspy 1.6-litre and 2.0-litre petrol units are effervescent, but need to be worked harder than the diesel; no great hardship, given their love of high revs!

Marketplace The 147 is an individual and stylish piece of design. Offered in both three- and five-door guise, even the five-door looks sporty, thanks to its nose-down stance and rear door handles hidden in the window frames. Alfa Romeo facelifted the 147 range in 2005, and introduced some interesting new variants in 2007 – to help it fare off increasing competition from the BMW 1-Series, Audi A3, Mercedes C-Class Sports Coupe and Volvo C30. As such, the range is fairly logical, with Turismo and Lusso trims, plus the special Q2, and a choice of four engines – two petrols, two diesels.

Owning Inside, the Alfa is staring to show its age. The plastics are hard and scratchy, build quality lags behind the best, and space in the rear is limited. The low driving position impresses, though, and there is plenty of room in the front. We also like the red stitching that features, on certain models, around the seats, steering wheel and gearlever. It’s fairly well-equipped too, though some of the more advanced features offered on rivals are lacking here. Also of concern are retained values – while decent, they can’t compete with BMWs and Audis, while reliability is also a long-running issue. At least diesels return impressive fuel consumption figures.