Alfa Romeo's limited edition 147 Sport has been reinvigorated with the Q2 differential. But will that be enough? 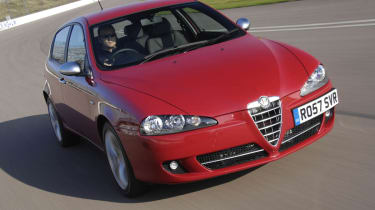 Adding the Q2 differential has revitalised the 147. It rivals the best hot hatches for driving enjoyment and provides extra stability, particularly in the wet. The diesel engine is smooth, willing and frugal, while the body has lovely Latin looks. On the downside, the interior is cramped, while the quality and reliability remain questionable. Until these issues are addressed, the Alfa will remain charismatic and fun – but ultimately flawed.

When it comes to building great sports cars, Alfa Romeo knows a thing or two – just look at the stunning 8C Competizione we drove a few weeks ago.

Yet it’s a different story with hot hatches – the Italian firm has struggled to hit the target for many years. It hasn’t topped the class with a car that’s truly brilliant to drive since the classic Alfasud of the Seventies. But could that be about to change?

With the 147 Q2 Sport, company bosses hope that Alfa fans will have something to cheer about. Thanks to a new limited-slip differential and sports suspension, the newcomer is said to be the best driver’s car the firm has yet launched in this sector. Combined with the powerful 150bhp 1.9 JTD powerplant, it also promises a decent turn of speed.

However, the Q2 is entering an extremely competitive market. In particular, it has to overcome the all-round abilities of the VW Golf GT TDI 140 and Seat’s Leon FR TDI 170. So are the tweaks enough to make the 147 a contender for class honours? Externally, little has changed on the Alfa. And that’s no bad thing, as it remains an individual and stylish piece of design. Even the five-door looks sporty, thanks to its nose-down stance and rear door handles hidden in the window frames.

Other neat details include aluminium trim on the mirrors, new five-spoke alloy wheels and special Q2 badging, which marks this out as the range-topping version.

Subtle modifications have been made to the interior. Additions include red stitching on the seats, steering wheel and gearlever, while there’s a discreet Limited Edition sticker on the coin tray which sits between the comfortable front seats.

Elsewhere, however, the cabin is starting to show its age. The plastics are hard and scratchy, build quality lags behind the best, and space in the rear is limited. The low driving position impresses, though, and there is plenty of room in the front.

On the road, the 1.9-litre diesel engine is one of the smoothest oil-burners around. It also gives strong performance and its appetite for revs is like that of a petrol motor. Better still, fuel returns on the combined cycle are a healthy 47.9mpg. But what really stands out is the improvement in handling. The Q2 differential really makes a difference in the corners. Grip is much stronger, and the 147 refuses to spin away power even when you apply plenty of gas.

The steering is direct and well weighted, while the standard six-speed manual transmission has a precise action and short throw. Only a firm ride lets the overall package down, as the car becomes fidgety when travelling over poor surfaces.

At £17,450, the 147 Q2 is good value, especially when compared with the slower – and £1,400 more expensive – Golf. The Alfa also offers the sort of style and charisma that few in the class can match. Best of all, the special limited-slip differential can be ordered as an option on any other model in the range. For £450, the system transforms the 147 driving experience, making the car as much fun as the best hot hatches.

Unfortunately, though, that isn’t enough to disguise the fact that time is catching up with the Italian. Many rivals have more equipment, greater space and a vastly superior build.

Rival: Seat Leon FR TDI 170 The sporty Spaniard provides lots of pace, thanks to its torquey yet gruff 168bhp 2.0-litre diesel motor. It beats the 147 on practicality, is similarly priced and equally economical. But it can’t match the Alfa’s fun or style, and the extremely stiff ride soon becomes tiring.