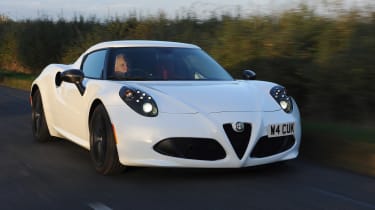 The new Alfa Romeo 4C looks great, accelerates savagely and its weight-saving regime is impressive. With the ‘comfort’ chassis it’s marginally more docile than it was, but not enough to change its fundamental character. It’s still far from an everyday car and the powertrain lacks the refinement of its rivals.

It’s fair to say the Alfa Romeo 4C has failed to live up to the hype – its bone-jarring ride and fidgety handling are at odds with its sublime styling. However, this is our first go in a full UK-spec right-hand-drive car fitted with the standard chassis, rather than the ‘racing’ set-up.

Unlike any other 4C we’ve driven before, this version comes with smaller wheels (17-inch at the front and 18s at the back), no rear anti-roll bar and softer springs and dampers – making an immediate difference. The steering wheel still wriggles around in your hands, passing on information about the road surface below, but it doesn’t sniff out cambers and follow tiny ruts in the road with quite so much enthusiasm. 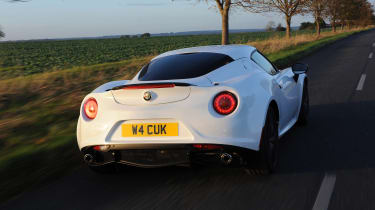 Nor does it crash over every surface imperfection so violently – but these things are relative. By any normal standard, it’s still a bruising experience to drive on public roads. At low speeds, the unassisted steering provides a real workout, and the limited rear visibility makes parking sensors a must.

Clearly, this isn’t a car that’s been designed with the city in mind; and as the speed increases, things improve. The steering lightens up in your palms and loads up nicely in corners, while the four-cylinder turbo’s roar makes it sound like a mini McLaren 650S. With just 895kg (plus fluids and passengers) to push along, it possesses a vicious turn of pace and has the agility to match. 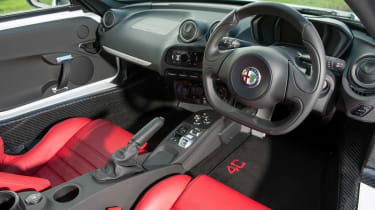 To really make the most of the 4C’s high-speed talents, however, you need a powertrain you can trust, and the engine’s spiky delivery makes it unpredictable on the limit.

There’s no denying it’s a gorgeous piece of design, though. Its advanced carbon fibre monocoque and ballistic power-to-weight ratio make for mouth-watering reading. However, its execution seems confused – it’s too harsh to be driven every day (even in this ‘comfort’ spec) and it trails its rivals for handling on the limit. The 4C seems destined to be an exotic oddity rather than the driver’s car benchmark that it could have been.