Alfa 4C Spider looks sublime, and gets some mechanical updates too - but it costs £8,000 more than the coupe 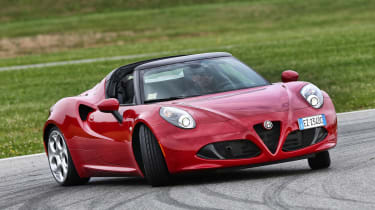 The 4C Spider is more than just a 4C Coupé without a roof, it’s Alfa’s attempt at addressing some of the criticism levelled at the unruly coupé. Changes to the steering and suspension mean it flows along the road better than before, but push a little harder and problems with the laggy power delivery, reluctant gearbox and booming exhaust note persist. It makes the Porsche Boxster, and even the Lotus Elise, look refined by comparison. It’s lucky the 4C Spider is so drop-dead gorgeous, because the drive still doesn’t live up to the looks.

Both have mini-supercar proportions and styling to make you go weak at the knees, but why the significant price hike? Aside from the extra kit and wind-in-your- hair thrills, Alfa Romeo has claimed to rectify the coupé’s jittery on-road manners with the 4C Spider. But does it justify the extra cash?

On paper at least, Alfa appears to have addressed the somewhat erratic character of the coupé. Tinkering with the 4C’s chassis should have helped tame its wayward nature, while at the same time making it a more rewarding driver’s car. What hasn’t changed is the mid-engined layout, carbon monocoque chassis and unassisted steering. That combination proved to be a handful in the coupé, especially with the raw 237bhp 1.75-litre turbo nestling inches behind the driver’s head.

Bar the odd fraction, the Spider is as impressively quick as the coupé: 0-62mph in 4.5 seconds and 160mph flat out. Alfa has also made available the choice of three exhaust systems, too – standard (loud), race (very loud) and, at extra cost, an Akrapovic system which has a switchable valve giving a choice between the two volume settings. 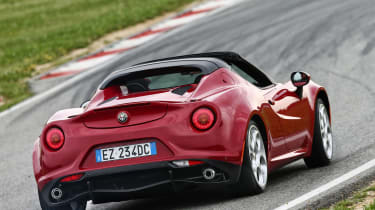 By removing the roof and redistributing certain bits of equipment within the car, there’s been a marginal shift in weight distribution (40:60 front and rear versus 35:65 for the coupé). There’s also been detail changes to the suspension and steering, with noticeably positive results – it’s less of a battle hustling the Spider down a winding backroad than it is in the coupé.

The weighting is still quite heavy – much heavier than that of a Lotus Elise – but it’s far more consistent and doesn’t kick back or move around with the same severity. You get a far more detailed picture of what the front wheels are actually doing, giving you greater confidence to press on where you would have backed off in the coupé. Opt for a set-up which is more comfort orientated, with the smaller wheels and softer suspension and the changes to the steering are amplified, adding a degree of suppleness and flow to the process.

The engine, however, remains largely untamed, plagued by old-fashioned turbo lag, a throttle which is hard to modulate when the engine is on boost, plus a booming, but characterless exhaust note. On faster runs, the laggy engine response and over-zesty mid-range makes it difficult to find a consistent rhythm with the car. Where a Porsche Boxster or Lotus Elise would flatter you, the 4C Spider falters. 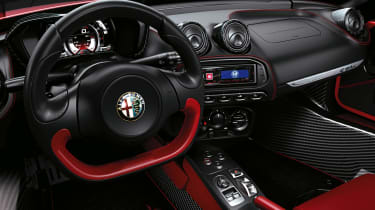 Specific to the Spider is a bespoke engine cover sporting a brace of rear buttresses and a pair of new headlights which replaced the opinion-dividing bug-eyed lamps from the coupé – but you can option those if you want to. The cabin is tight, but getting in a far simpler process with the roof off.

Drop inside and the tightly contoured cabin feels less claustrophobic due to better rearward visibility, but the hard and flat-bottomed seats are just as uncomfortable.

One notable addition is the fabric roof. Unclipping and refitting the 7kg fabric top is a fumble-free, two-minute, one-person exercise and possibly more impressive for the snug refinement it provides in place.When neatly stowed in the boot, hair-ruffling is kept to a minimum, thanks to a spoiler lip fitted across the header rail deflecting air upwards, away from occupants.

Adding a greater sense of maturity inside, Alfa has kitted the 4C Spider out with a new Alpine head unit and hi-fi system, plusher floor mats, parking sensors and cruise control as standard. There’s also air conditioning and a leather trimmed dash but its not enough to distract you from the still unruly character of the feisty Italian sports car.