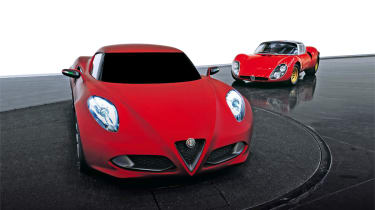 By using cars such as the sensational 33 Stradale as visual inspiration, and mixing in the latest composite chassis technology, plus one of the world’s best turbos, Alfa has shown it still has the desire to excite. The Cayman-rivalling 4C is just what enthusiasts have been demanding for years: an affordable rear-wheel-drive sports car. And it stands up well when compared with its illustrious forebear. We’re looking forward to getting behind the wheel of the newcomer next year.

The halls at Alfa Romeo are already full of stunning machinery. But recently, the firm has added another mouth-watering model – in the shape of the incredible 4C. This Porsche Cayman-rivalling coupé wowed visitors to March’s Geneva Motor Show, and is set to go sale next year. It’s only the second mid-engined Alfa ever... and we’ve brought it together with the first!

The stunning 33 Stradale – even by Alfa’s own illustrious standards one of its rarest and most beautiful creations – was arguably the marque’s first-ever supercar. But with its compact dimensions, curves and mid-engined layout, it’s providing inspiration for a new generation of models.

Yet while the 4C gives Alfa an affordable fast car with a price tag of around £40,000, the 33 Stradale was never meant for such wide appeal. It debuted at the 1967 Turin Motor Show, and was designed as a roadgoing racer, sharing components with the Autodelta Alfa Romeo T33.

But while the 33 Stradale and 4C are poles apart on price, they’re similarly sized and share styling cues. “Even though there are 44 years between them, the organic shape is as relevant now as ever,” Fiat design boss Lorenzo Ramaciotti told us. “But we didn’t want the 4C to be a retro car. We wanted it to be in touch with its ancestor, yet still be a modern design.”

You can see that in the pert tail, the short overhangs and especially in the air intakes on the rear arches – yet as Ramaciotti explains, the 4C is thoroughly up to date, mixing cues with its bigger brother, the 8C Competizione supercar.

While you don’t climb in via a set of ‘butterfly-style’ doors as you do in the 33 Stradale, the 4C is hardly lacking in concept car glamour, with its outlandish shapes and colours. But you can expect the production model to borrow from the 33 with a simple, functional cabin.

Under the skin, the 4C is very modern indeed. It uses an evolution of the composite chassis and tub that was created by Italian firm Dallara for KTM’s X-Bow. The composite cockpit remains, but significant tweaks have been made to incorporate a pair of doors, while the front and rear subframes are built from aluminium. This keeps weight below 850kg.

Power comes from a 250bhp version of the 1.75-litre petrol turbo found in the Giulietta – this drives the rear wheels through Alfa’s TCT twin-clutch gearbox, which features paddleshifters on the steering wheel.

Its predecessor is even lighter, though, with aluminium bodywork and a structure unburdened by today’s crash-protection regulations. Weighing only 700kg, it uses a 2.0-litre dry sump V8 with an incredible rev limit of 10,000rpm. In roadgoing trim, the engine produces 230bhp at 8,800rpm – although track versions could be uprated to 270bhp.

The race-style engine powers the rear wheels through a six-speed manual transmission, and propels the car from 0-60mph in 5.5 seconds. Its modern-day spiritual successor is expected to be equally fast and enormously exciting to drive. It marks a new chapter for Alfa – and we can’t wait to sample it on the road.