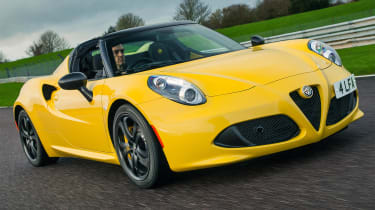 If you could sum up the 4C Spider, you’d have to say it’s ‘a handful’. There’s no doubt it looks great and it’ll turn heads wherever you go, but even a trip to the shops is a full-on experience as you wrestle with the steering and manage the engine’s laggy power delivery. Push harder, and the nervous handling means you need to treat this Alfa with respect, but it’s nowhere near as rewarding to drive as other cars with a similarly high price tag.

There’s nothing more evocative than an open-topped Italian sports car, and the new Alfa Romeo 4C Spider is aiming to tap into that appeal. The drop-top version of the coupe model is now available here in the UK, and we got behind the wheel.

The 4C Spider is set apart from the coupe by a few detail changes. The most obvious differences are the addition of a fabric roof and a redesigned engine cover, while the coupe’s controversial LED headlamps have been replaced by a more conventional xenon light design. However, the LEDs are still on the options list, for £850, while our car’s vivid yellow paint is exclusive to the Spider, costing £600. 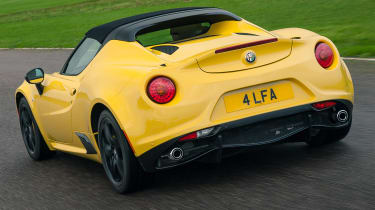 The roof itself is essentially a fabric section that you remove manually, much like a Lotus Elise’s. Unfortunately, that means it’s fiddly to drop and reattach.

Elsewhere, Alfa Romeo has added 45kg of body strengthening to compensate for the loss of the roof, but the 4C Spider still slips under the one-tonne mark, at 940kg. That’s thanks to the use of a carbon-fibre tub chassis and aluminium components in the front and rear subframes.

Power comes from the same 237bhp 1.75-litre turbo four-cylinder engine as in the 4C coupe, while the six-speed TCT twin-clutch gearbox is also carried over. As you would expect in such a lightweight car, acceleration is rapid, with Alfa claiming 0-62mph in 4.5 seconds. The Spider’s DNA switch allows you to toggle between Dynamic, Natural and All Weather settings for different throttle response and gearshift modes. 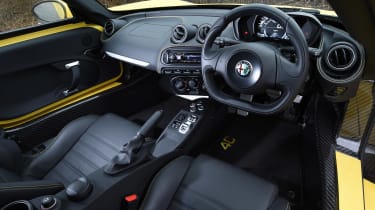 In reality, the DNA switch doesn’t change the 4C Spider’s character enough to make a difference to the way the car drives. Only in All Weather mode does throttle response soften off, but even then the engine’s power delivery needs to be kept in check to make the most of the car’s performance. Floor the throttle in a low gear in Dynamic mode, and you can hear the turbo spool up as the power comes in before the Alfa fires down the road. It’s a similar story in Natural mode, as you still have to wait for the engine to deliver the goods, but the gearshifts are slightly less severe.

Keep the DNA switch pressed down in Dynamic mode, and the Race function is activated. This switches off the traction control and enables launch control for perfect standing starts. The 4C can be pretty entertaining on the right road, especially if you go for the fruity-sounding sports exhaust option for £500. However, the engine’s laggy power delivery means it can easily upset the car’s balance, which puts further strain on the chassis. 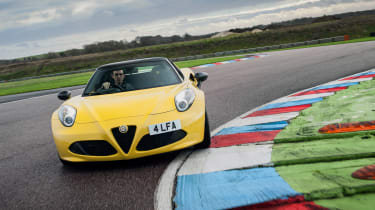 And unfortunately, handling is the biggest disappointment. While Alfa designed the 4C to be a flagship sports car, the combination of a wide track, short wheelbase and unassisted steering means the Spider is just as nervous and unsettled to drive as its coupe counterpart. The steering delivers good feedback, yet the front wheels constantly hunt for cambers and dips in the road, causing the wheel to writhe in your hands even at sedate speeds.

Press on, and you’d expect the steering to be more manageable, but the chassis set-up is such that you need a lot of effort with the wheel to deal with quick changes of direction, leaving you constantly chasing the car as it tries to regain composure.

Add in a price tag that’s dangerously close to the £60,000 mark – an £8,000 premium over the coupe – and the 4C Spider’s appeal wanes even further. Sure, it looks fantastic, but as you can get far more accomplished rivals like the Porsche 718 Boxster S and Lotus Elise Cup R for nearly £10,000 less, you’d have to be a truly hardcore Alfa fan to consider buying one.