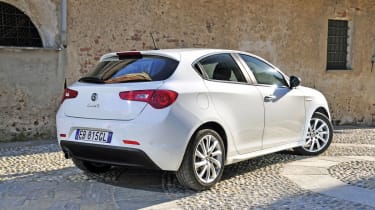 The Giulietta is hugely important – not only for Alfa but for the Fiat Group as a whole. It’s a serious entry into one of the European market’s most lucrative areas, and also debuts the Compact platform which will underpin future Fiats, Lancias and Chryslers. It’s a good all-rounder: the engine, brakes and suspension perform strongly, while the cabin is sumptuous. Artificial steering and a clumsy character in corners mean it’s not quite as good to drive as it is to look at, though.

Could it be love at first sight? Meet the stunning Alfa Romeo Giulietta – an all-new Ford Focus-rivalling five-door hatch which replaces the ageing 147. And Auto Express was the first behind the wheel, to see if the newcomer can live up to its classic namesake from the Fifties.

Designers have once again drawn from the 8C Competizione supercar’s DNA, so if the MiTo supermini isn’t your cup of tea, then you’re unlikely to fall for the Giulietta, either. But it’s definitely a striking piece of design, aimed at those looking to stand out from the usual VW Golf and Ford Focus crowd.

A bold grille uses the classic Alfa shield design, while both the head and tail-lights employ LEDs to create an upmarket look. Our model was fitted with the optional Sports pack, which adds bigger 17-inch wheels, side skirts and darker headlamp surrounds, plus slightly firmer suspension settings. A hidden handle for the rear doors gives the car a sportier three-door look, too. The luxurious cabin outclasses that of the Vauxhall Astra, while only the Golf can match it for quality of materials.

A row of toggle switches lifted from the 8C gives a sense of occasion, and the fact that the Giulietta is aimed at families is emphasised by the open layout of the dash rather than a driver-oriented design. With the back seats in place, the 350-litre luggage space matches the Golf’s.

There are a few surprises, too. Specify sat-nav and the pop-up screen comes pre-loaded with both a visual G-meter and a race car-inspired display showing throttle input and turbo boost. Under the skin, the Giulietta sits on the Fiat Group’s new Compact platform. A sophisticated multi-link rear suspension set-up makes extensive use of aluminium – something Alfa claims saves 10kg over its competitors.

There’s also the switchable DNA system, first seen on the MiTo, which allows drivers to choose between Dynamic, Normal and All-weather modes.

Both these factors, says the firm, give the Giulietta a perfect balance between comfort and sportiness. First impressions are good. We tried the 168bhp 1.4-litre MultiAir turbo first seen on the MiTo Cloverleaf, which provides impressive shove for such a small motor producing only 134g/km of CO2. In true Alfa style, it sounds the part, too – engineers claim it’s been tuned specifically to sound like the Spider ‘Duetto’ from the Sixties.

Our major gripe with the MiTo is its ride, but the Giulietta soaks up bumps with far more sympathy – although the roads in and around the Fiat Group’s test facility in Balocco are notoriously smooth, so we’ll have to wait for a full UK test to deliver a definitive verdict.

The steering is quick and direct – but it takes on an unnecessary artificial weight when you switch to the Dynamic setting, adding no additional feel, but requiring plenty of extra effort. We kept it in Normal mode for the most part, sacrificing some throttle response for the lighter steering setting. It’s a shame the parameters for each of the DNA system’s modes can’t be tailored individually.

Throw the Giulietta into a corner and there’s plenty of grip – even drivers with a heavy right foot will find it difficult to get the car to deviate from its intended line, which is both a plus point and a black mark.

There’s little finesse or delicacy to the controls, and while competitors feel like they are dancing on their toes when you up the pace, the Giulietta seems flat-footed.

That’s something which should be addressed when we drive the even hotter Cloverleaf version, complete with a 232bhp 1.75-litre turbo, next week. The range-topper will rocket from 0-62mph in 6.8 seconds and hit 150mph, taking the fight to the forthcoming Focus ST and Golf GTI.

Other engines include an entry- level 118bhp 1.4-litre turbo, plus a pair of turbodiesels: the 104bhp 1.6 JTDM and the 168bhp 2.0 JTDM. All have a six-speed manual as standard, but soon after the car’s summer launch a TCT dual-clutch gearbox will be introduced on the higher-powered variants.

Using technology derived from the Ferrari California and 458 Italia’s seven-speeder, the TCT will boost fuel economy and bring in a wider range of customers who demand an automatic option.

Despite its flamboyant styling and sporty interior, don’t buy the Giulietta expecting a sharp drive. The Focus, Golf and Astra all trump it when it comes to thrills at the wheel. However, as a top-quality, spacious and refreshingly different family car, the Alfa excels.

Rival: VW Golf GT Fitted with a 1.4-litre turbo engine, the 158bhp Golf GT is an excellent choice for those who can’t quite stretch to a GTI. Rock-solid residuals and high levels of refinement are only two reasons why it still leads the way.