BMW-based manufacturer Alpina casts its spell on drop-top 4 Series; the result is the impressive B4 Convertible 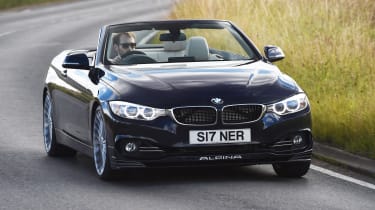 The B4 Convertible is yet another shining example from Alpina of how to develop a seriously quick but comfortable sports car. It’s a match for the M4 on the spec sheet, but delivers its performance in a more civilised and rounded manner, boosting its day-to-day usability above and beyond the BMW. Being an Alpina also means you’ll have exclusivity on your side.

Alpina has been applying its unique touch to BMWs for 51 years and the new B4 Convertible is its take on the drop-top M4.

It costs from £62,950, which makes it £1,790 more than its BMW counterpart – so the obvious question is why would you buy a lesser known, more expensive alternative? 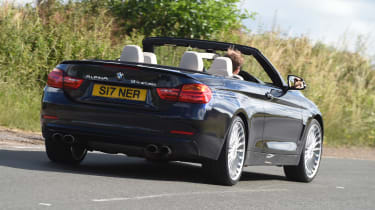 While the Alpina’s rarity will appeal to some, the convertible’s real strength is how it convincingly blends performance with refinement. Rather than start with an M4 as a base, the manufacturer takes the softer 440i and tweaks everything from the engine to the aerodynamics to make it an Alpina.

Still, the performance figures remain impressive – 0-62mph is covered in 4.5 seconds, while the 187mph top speed eclipses the M4, which is electronically pegged at 155mph. As standard, the engine is paired with an eight-speed automatic box, rather than the rapid dual-clutch auto that the M4 uses. Like its application in various BMW and JLR models, it’s smooth, punchy and timely with its changes.

Despite another turbocharger being bolted on to the engine, power delivery is remarkably linear and smooth – unlike in the snappy M4. The whole process of going quickly in the Alpina is far less frantic than it is behind the wheel of the BMW. The same goes for the ride, too, which is more supple and forgiving than the M4’s, despite the large 19-inch alloy wheels and thin slither of rubber wrapping them. 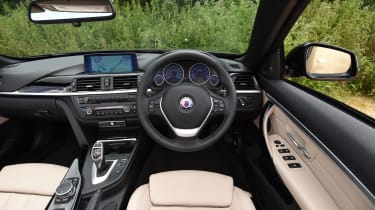 The more laid-back approach to going quickly does reduce the excitement levels slightly, but in a convertible, it feels like a better character fit. The folding hard-top is heavy – this car is 225kg beefier than the B4 coupe – and that added weight does blunt the convertible’s responses slightly.

On the plus side, lowering the roof removes the barrier between you and the noise of the Akrapovic exhaust, which gives the Alpina a satisfying rasp as the you climb through the revs.