Taking the edge off the BMW M4, the Alpina B4 S Coupe adds comfort and luxury without sacrificing performance 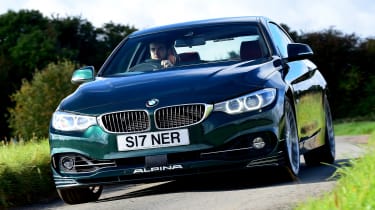 While the Alpina B4 S isn’t as razor-sharp as a BMW M4, it’s more luxurious, more exclusive and feels like a better buy as a daily driver. The ride is comfortable without sacrificing the 4 Series’ engaging handling, and the subtle styling gives it a more sophisticated feel as well. The best part is that performance is still incredible, thanks to that torquey straight six under the bonnet.

The BMW M4 is one of the best performance coupes around, but there’s no denying that it’s a bit outlandish. Those wide arches, huge exhaust pipes and the muscular bodywork give it a sporty stance on the road, but for many that’s just too much.

That’s where the Alpina B4 S comes in. It costs around the same as an M4, and has a little more power, but it’s much more focused on understated luxury and fast cruising than BMW’s product. This latest version benefits from the 4 Series’ latest facelift, but it’s still distinguished by its special alloy wheels and unique front bumper design, as well as the plush interior spec.

Alpina has tweaked the 3.0-litre bi-turbo straight-six engine under the bonnet to produce 434bhp; that’s more than the M4 and 24bhp more than the previous B4 model. Torque is up by 60Nm as well, so there’s a maximum of 660Nm available. 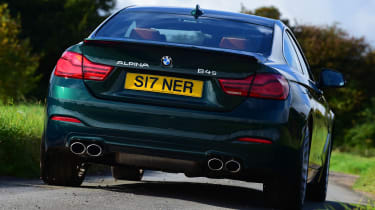 That means performance is astonishing; the Alpina will go from 0-60mph in just 3.9 seconds, and the engine pulls hard in any gear. It sounds great through the Akrapovic exhaust - more muted than the M4 but with a sweeter tone. It’s frantic when you want it to be, but the wide spread of torque means it’s able to be more relaxed than the boosty M4 when you’re driving it normally.

The eight-speed auto (Alpina's own tune of the regular BMW unit) is smooth and fast-shifting, so it helps with the luxurious feeling, but the B4 S isn’t all about wafting around. The steering could do with a bit more feel, but it’s sharp and accurate, and the chassis is well set-up to deal with rough roads. 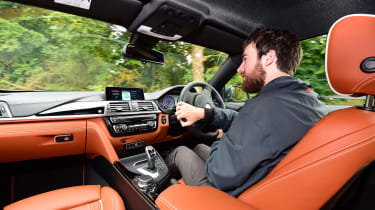 It’s not as flat through corners as the hardcore M4, but the Alpina is stiff enough to feel sporty without bouncing over bumps and potholes unpleasantly. It’s a great compromise, and while the M4 feels more like a proper sports car, the Alpina arguably works better as an everyday car.

The latest version now gets a limited-slip differential and Michelin Pilot Sport 4 S tyres as standard, and these help it to put more of that power down. Because the B4 feels more approachable than the M4, it’s easier to enjoy driving on the road as a result.

Standard kit includes Alpina’s own leather seats and 20-inch alloys, plus BMW Professional Multimedia with sat-nav and real-time traffic updates. The interior feels plush and a fit for the £63,000 price tag, especially thanks to the exclusivity factor; there’s the usual Alpina plaque showing the car’s build number on the centre console.