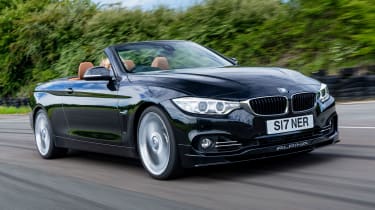 The Alpina D4 is the diesel M car that BMW hasn’t got the nerve to build. It delivers sharp handling and searing performance that tread on the toes of BMW’s own M4, yet boasts a subtle look that makes it more appealing. Add the lower running costs of the diesel, plus a near-£10k saving over the M4, and it’s very tempting. The Convertible isn’t the sharpest, but it’s no worse than the M4 drop-top.

Alpina has spent 50 years fine-tuning BMWs by increasing performance and sharpening the handling, and the latest model in the line-up is the new D4.

It’s based on the BMW 435d, albeit without that car’s now-standard four-wheel drive, and is available in Coupé or Convertible form. Alpina has added its eight-speed Switchtronic auto, boosted the engine to 350bhp, revised the suspension and made a few cosmetic tweaks, too.

Styling revisions include a minor bodykit and those not-so-subtle 20-inch alloys, but overall, the D4 has a less imposing look than BMW’s own flagship M4. Inside, there are blue-backed dials, a hand-stitched steering wheel and a numbered plaque on the dash reminding you of the D4’s exclusivity. Everything else is pure 4 Series. 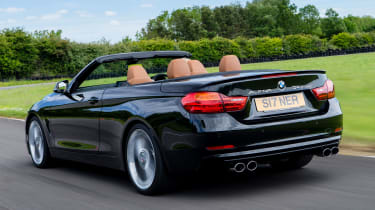 The broad power band and 700Nm of torque mean the D4’s great for overtaking, while the engine has a sporty note for a diesel. The suspension tweaks more than compensate for the large wheels and low-profile tyres – the car is firm yet composed – but there’s plenty of tyre noise at speed.

In corners, the D4 Convertible is pegged back by the extra weight of BMW’s complex folding hard-top. There’s some twist in the body, but the Alpina is still entertaining.

The only real issue is with the gearbox, because, while it delivers crisp shifts in auto mode, the small buttons on the back of the steering wheel make manual changes fiddly.