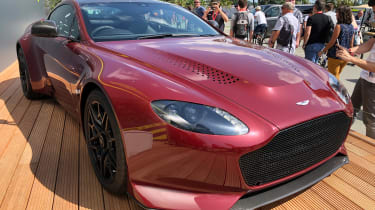 The Aston Martin V12 Vantage V600 has made its public at the 24 Hours of Le Mans race. Acting as a send-off for the outgoing V12 Vantage, the V600 is a new limited run customer commission special and is intended to be the ‘ultimate analogue Vantage’.

It’s not the first time Aston has applied the V600 badge to an outgoing icon – the 1998 V600 V8 Vantage takes that honour, and this new V12 powered special edition Vantage is also positioned as an extreme, uncompromised iteration intended to bring the curtain down on FH chassis Vantage production. 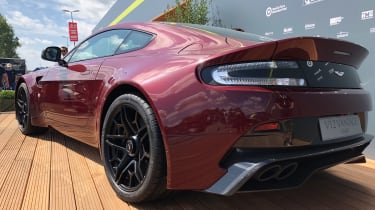 14 have been commissioned – seven coupes and seven roadsters – each powered by an uprated version of Aston’s 6.0-litre naturally aspirated V12, producing 592bhp. That’s 27bhp more than the V12 Vantage S, cutting the 0-62mph to 3.5 seconds. Top speed remains at 205mph.

Power is sent to the rear wheels via a seven-speed manual gearbox, while the suspension set-up comprises front and rear independent wishbones with three-stage adaptive damping.

Visually, the V600 looks quite different to the regular V12 Vantage and features a full carbon-fibre exterior. A new, streamlined front apron, housing a honeycomb grille larger in size than before which feeds more air to the uprated power unit, defines the front end of the car. A more aggressive side strake profile appears too, as does a new bonnet. At the back, a new rear diffuser is home to a quad exhaust system. The whole thing rides on bespoke, centre locking, machined aluminium wheels. 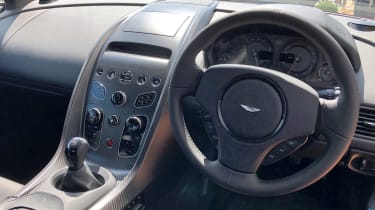 Inside, the cabin is trimmed with a mixture of naked carbon-fibre and dark anodised aluminium. Lightweight sports seats are present while the centre console is all carbon-fibre, though the gear lever is machined from a single lump of aluminium.

With such a limited production run planned, and with the vehicles earmarked for Aston’s most distinguished customers, prices for the V600 are available on request only. The few who do purchase the run out special can expect their cars in the third quarter of 2018.

Are you a fan of Aston Martin? If yes, then why not come to the exclusive Dennis Publishing An evening with...Aston Martin this July?