The Aston Martin DB4 GT Zagato Continuation revives the brand's iconic racer, and is set to make its debut at Le Mans 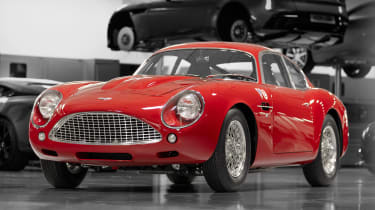 Aston Martin has pulled the covers off a new hyper-exclusive ‘Continuation’ model in the build-up to the Le Mans 24 Hours race.

It’s the new DB4 GT Zagato Continuation, on sale as part of a £6 million duo alongside the upcoming DBS GT Zagato, which together forms what Aston calls the DBZ Centenary Collection.

While first deliveries of the DB4 GT Zagato Continuation will take place in the third quarter of 2019, the DBS GT Zagato - based on the new DBS Superleggera - will arrive in 2020. Another continuation model outside the DBZ collection has also been announced, in the form of the ‘Goldfinger’ DB5. 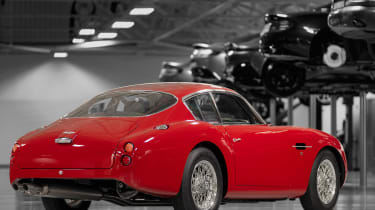 Just 19 DB4 GT Zagato Continuations will be built. Aston claims each example of the track-only lightweight 60s racer takes 4,500 hours to complete, while all will be produced at Aston’s Heritage Division headquarters in Newport Pagnell.

The first car is finished in Rosso Maja red paint, which Aston claims to have matched to the original tone created by the paint suppliers for the original cars.

Open the door, and the interior is trimmed with black leather with black carpets. There are some modern touches, however - the sports seats are made from carbon fibre, and a contemporary, FIA approved full roll cage has also been equipped.

Under the bonnet is the same straight-six engine used in the DB4 GT, but bore increases to take capacity to 4.7 litres, with the engine now producing ‘in excess’ of 390bhp. Power is sent to the rear wheels through a four-speed manual gearbox and a limited-slip-differential.

Like the original, the DB4 GT Zagato Continuation is built by hand using a combination of lightweight aluminium body panels just 1.2mm thick, which surround a tubular frame chassis. Some modern techniques have been employed to assist production, however, such as the introduction of a fully digitalised bodywork buck. This allows Aston engineers to inspect bodywork shape and fit to modern standards.

Do you think Aston Martin's range of Contuination models are a good idea? Let us know your thoughts below...