Sensational pictures show Aston is reviving the Lagonda nameplate on a stretched saloon, inspired by the 1976 original 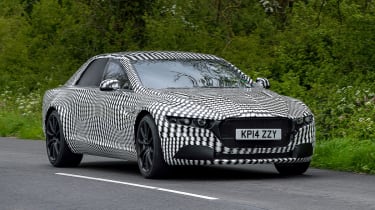 Aston Martin is working on a new V12-powered four-door saloon in the mould of the iconic wedge-shaped 1976 Lagonda. And the similarities are believed to extend beyond just the shape – Aston Martin could revive the Lagonda nameplate for this modern remake.

Unlike Aston’s other four-door saloon, the Rapide, it will be built in extremely small numbers and won’t be a member of the main model range – much like the CC100 speedster, V12 Zagato and One-77 in recent years.

An Aston Martin spokesman told us: “I can confirm that this is one of a bespoke series of coach built cars and as we’ve said before, much is possible through Q by Aston Martin –including bespoke offerings, just like CC100 - this is another example. We cannot say any more at this time.”

Spotted near Aston Martin’s headquarter in Gaydon, Warwickshire, the camouflaged prototype leaves little to the imagination with the lights, grille and stretched profile all on display. The body panels are believed to be made from carbon fibre – like the Vanquish and V12 Zagato – while the angular boot, roofline and flanks are all nods towards the 1976 original.

Aston’s latest Q car is understood to be based on the same aluminium VH architecture that underpins all Aston’s, but with a stretched wheelbase to create more legroom in the rear. A quick check of the numberplate on the DVLA’s website reveals a 6.0-litre V12 engine is under the bonnet, likely to produce the same 565bhp as the Vanquish, and connected to a six-speed automatic gearbox.

The last time the Lagonda name raised its head was on Aston ill-fated 2009 SUV concept, based on Mercedes ML underpinnings. However, our latest information is that an SUV is not part of the product plan, leaving this saloon as the sole model keeping the Lagonda bloodline alive.

Believed to be driven by demand from some of its wealthiest and most influential customers, getting your hands on one of one won’t be easy. A price tag in excess of £400,000 is expected with the production run limited to around 100 examples. A full reveal is expected in the final quarter of this year. 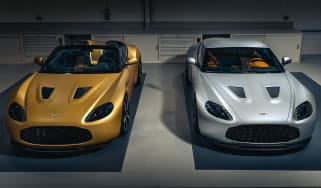