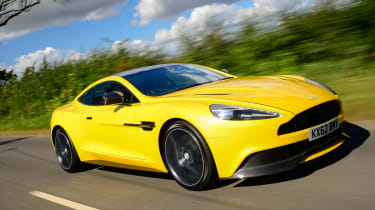 The original 2001 Vanquish was a milestone that helped re-establish Aston Martin as a maker of desirable GTs. And the new car lives up to the illustrious badge. It’s no revolution, but it promises to be the best incarnation yet of the DB9 model lineage. It’s faster, lighter and better-looking than the old DBS, and its improved cabin and reworked engine show how Aston continues to evolve its large GT cars. We really can’t wait to drive it.

It’ll be a few weeks before we get to drive the all-new Vanquish, but Aston Martin chief engineer Chris Porritt has whet our appetite – by taking us out for a passenger ride in the brightest prototype he could find. We fastened our seatbelts and held on tight.

The Vanquish takes over from the DBS as the ultimate Aston sports car. It slots into a simplified line-up above the DB9 – which itself has been updated to replace the Virage – and blends styling cues from the stunning One-77 with the unmistakable DB9 shape.

The sculpted roof, bonnet vents and bold side strakes help to deliver a delicately aggressive look. At the rear, the distinctive tail incorporates a clever fixed wing, while the rear light clusters are another nod to the One-77.

Under the skin, the Vanquish has the same VH architecture as the DB9, but significant use of carbon alongside the bonded aluminium structure improves torsional rigidity by 25 per cent.

The famous 6.0-litre V12 engine has also been heavily revised to produce 565bhp and 620Nm, making this the most potent full-production Aston yet. It’s also mounted 19mm lower in the chassis, which Chris points out results in a lower centre of gravity and sharper handling.

Even from the passenger seat, it’s clear that there’s a broader spread of torque and a greater sense of urgency at higher revs.

Wider tyres front and rear ensure the chassis is capable of dealing with the extra performance, while the adaptive damping now has three settings: normal, Sport and Track. As with the DBS, a Sport button sharpens throttle response, opens the exhaust baffles and quickens the shift of the six-speed Touchtronic auto.

We’ll reserve judgement on the driving experience until we get behind the wheel, but even riding shotgun, the power, grip and poise of the Vanquish leave a lasting impression.

Perhaps the biggest leap forward, though, is inside. The dash’s inspiration comes from the One-77 and, without losing the traditional ambience, the Vanquish cabin has moved into the 21st century.

Modern touchpad buttons, which vibrate when pushed, replace the old joystick on the dash, while the infotainment system is simpler. New leathers and seat quilting also make the Vanquish feel opulent. There’s almost limitless potential for cabin personalisation, too.

All too soon, our time with the Vanquish is over; we can’t wait to get behind the wheel.