New Audi TFSI e PHEV drivetrains launched for Q5, A6, A7 and A8

Audi reveals new plug-in hybrid powertrains, badged TFSI e, for Q5, A6, A7 and A8 at Geneva 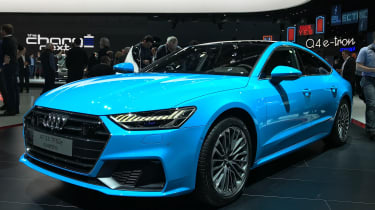 Audi has announced it will launch a range of plug-in hybrid powertrains for the Q5, A6, A7 and A8. The four new models will be available to order later this year, following their public debuts at the Geneva Motor Show, with all wearing Audi’s new TFSI e badging.

The hybrid Q5, A6 and A7 come in two power outputs, badged as either 50 TFSI e or 55 TFSI e. In the former, Audi’s 2.0-litre turbocharged four-cylinder petrol engine is mated to a gearbox-mounted electric motor, providing combined performance figures of 291bhp and 450Nm of torque.

Audi’s 55 TFSI e consists of a 3.0-litre V6 petrol with the same gearbox-mounted electric motor, for a combined output of 357bhp and 500Nm of torque. Both 50 and 55 TFSI e models make use of a seven-speed twin-clutch ‘S tronic’ and, typically for an Audi, send drive to all four wheels. 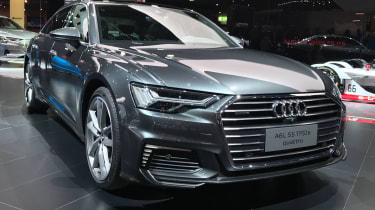 The new hybrid A8 also comes in two power outputs, badged as 55 TFSI e and 60 TFSI e. Lesser-powered 55 TFSI e models use the same powertrain fitted to the Q5, A6 and A7, whilst the range-topping 60 TFSI e features a higher-output version of the same setup, delivering 436bhp and 700Nm of torque. In contrast to the others, the A8 uses an eight-speed torque converter automatic gearbox.

All of Audi’s upcoming TFSI e models feature 14.1kWh lithium-ion battery packs mounted under the boot floor, with all claiming an electric-only range of more than 40km (25 miles) on the WLTP regime.

Drivers can select from three powertrain modes called “EV,” “Auto” and “Hold,” which set the cars priorities for either all-electric drive, fully automated hybrid drive or a “power saving” mode. The final setting retains a constant level of charge in the batteries, allowing for pure-electric running at the end of a journey.

In addition, buyers benefit from an additional set of drive modes, (called “comfort,” “efficiency,” “auto,” and “dynamic”), which influence the powertrain’s responsiveness, damper firmness and steering weight. In “dynamic” mode, for example, the suspension is stiffened, the steering’s power assistance is reduced and the electric motor works in tandem with the internal combustion engine to provide the maximum amount of performance available for each powertrain.

Buyers can also opt for a mode 3 cable for public charging and a domestic cable for charging at home. Owners can also request access to Audi’s own network of chargers at an additional fee. Prices for all four models are yet to be announced, but we expect more information to surface following their Geneva reveals.