Audi to electrify its entire range, with a new baby e-tron hatch and an all-electric R8 replacement on the cards 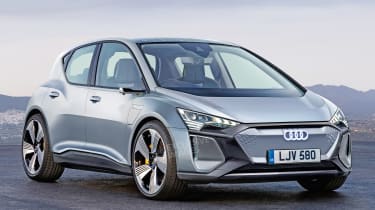 Audi is fast-tracking an electric vehicle programme that will see the German firm launch 20 fully electric cars by the middle of the next decade. A range of never-before-seen EVs is in the pipeline, but some of the brand’s best-known models will also make the switch to electric power.

While Audi’s focus will initially be on launching EVs at the upper end of its product range, where greater profits can be made, one of the most significant models to arrive will be a compact hatchback that will be priced from around £30,000.

A rival for the forthcoming Volkswagen ID.3, as well as the Tesla Model 3, it will act as Audi’s entry point into EV ownership. The car will be the first of three Audi EVs to be based on the VW Group’s MEB architecture, designed for compact to mid-size vehicles. 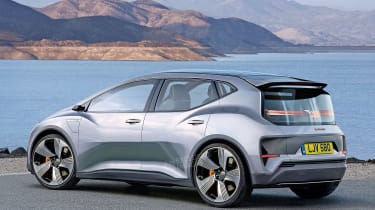 Previewed in our exclusive images, the model, which is expected to feature ‘e-tron’ or ‘eO1’ in its name, will be similar in size to an Audi A3 but have greater levels of interior space afforded by the new platform.

Audi’s positioning as the premium brand in the VW Group means it’s not likely to offer the car with the ID.3’s smallest 45kWh battery; instead the choice will be between the 58kWh and 77kWh set-ups. This should offer a range of at least 250 miles, with up to 320 miles possible in a larger-battery edition that’s likely to rival the Model 3 on price.

The MEB platform will let Audi offer entry-level cars with one electric motor at the rear, and a further motor on the front axle for those willing to pay extra for quattro four-wheel drive. It’s expected that the model will hit the market in 2021, giving VW, SEAT and Skoda time to launch their MEB cars first.

With CO2 emissions targets putting more pressure on car makers to clean up their ranges, long-standing Audi models, which have for generations used combustion engines, are also set for a radical rethink. The next version of the brand’s flagship, the R8 supercar, is causing huge internal debate within the firm’s management. 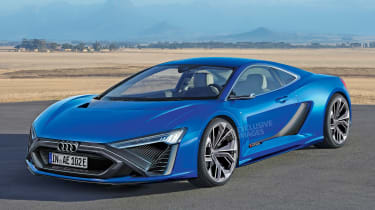 Audi’s CEO Bram Schot said in the spring: “Focusing also means leaving out. For example, the R8 sports car: do we need a successor with a combustion engine? Does this fit in with our vision? The discussion will give us an answer to that.”

However, insiders have suggested that the R8 will have a successor and that it will be fully electric. Audi’s board member for technical development, Hans-Joachim Rothenpieler, told us that a technical solution has already been drawn up.

“Normally you have a wheel at each corner with the battery pack in the centre, and the pack is 12 or 13 centimetres tall,” Rothenpieler told us. “But this makes the base of the seating point higher.

“So for small, sporty cars with only two seats, we need a different concept – such as one bit of the battery in the centre of the car and another bit in front of the front wheels, or behind the rear wheels. Either way, we end up splitting the battery. That’s what we’re looking at for these iconic cars.”

This principle could also apply to the TT – another of Audi’s long-standing models that will be making the switch to electric power. “In a few years, we will replace the TT with a new emotive model in the same price range – an electric car,” Schot revealed.

Audi could put the electric TT and RE8 onto the PPE architecture it’s developing with Porsche. The platform is designed for low-riding models in a range of segments; the Porsche Taycan will be the first model to use the tech, while the Audi e-tron GT four-door coupé will follow in 2021.

The e-tron GT will be Audi’s third EV, following the e-tron and e-tron Sportback SUVs. It’s a direct competitor to the Tesla Model S and is expected to cost around £100,000 when it arrives in showrooms.

The model will use a 95kWh battery that will deliver a WLTP range of 250 miles. The battery will power an electric motor on each axle, and these combine to produce 582bhp and deliver a 0-62mph time of 3.5 seconds.

What do you think of our exclsuive Audi images? Let us know your thoughts below...